Stretch Out and Wait 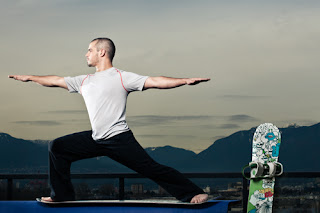 Deep in the recesses of my grey matter, I was hoping that going to yoga with my cousin David would be kind of an even-playing field of an event.

Oh, never mind that you're not to judge anyone else's practice, we all do it. You can't fight a tidal wave.

Actually, you don't judge them but you take notice of how much better they are than yourself and invariably feel bad for your own practice. Of course, I might just be talking about myself.  Aren't I always?

David is a rock star in the yoga. Ok, maybe he won't be teaching a class anytime soon, but I was duly impressed by his skills. He got into a few poses I could never do.  Ever. And for those who do it when they say to 'step or float to the front of your mat', he can move like no one else's business.  It's not quite floating, but it sure ain't stepping, like I do.

As one might imagine, it could have been trouble having us not only in a class together, but side-by-side. While others in the class might disagree, I think we were very well behaved...........overall.

Granted, I believe I said something I would not have said had I been alone.  And I do believe he did / said something he possibly might not have done without my present.  POSSIBLY.

The class started out quite serenely. The last class, I was dripping buckets in the first 10 minutes, this time we barely got going.  But once we did, somethings proved challenging for me - especially in chair pose and my aching quads were smarting. The yogini said we should have a smile on our face.  As if!

Then with her calm voice, asked the rhetorical, "where are you right now".  I couldn't help myself - I had an audience. I replied:  "in Hell!".   For a non-paying audience to my stand-up, it got a good response, even from the yogini.

Then while doing a modified pigeon, she came around to adjust me. It's always iffy when someone touches me during class. I want or need the help, but someone strange is touching me.  But I took it like a big boy. She moved my shoulders and head into a deeper position, really making me stretch. She also rubbed what I'm thinking was Vic's Vap-o-rub on the back of my neck and traced it down the back of my shirt. David could smell it being right next to me (but not seeing she'd done it) thought it was Ben Gay.

Now onto his doing.

While doing whatever we wanted near the end of class, David stretched his legs.....over his head.  Quite impressive considering he's taller than I am. But no, he couldn't keep quiet. He has to say, "a few more inches and a little push and I can get it into my mouth."

I'm in Bridge pose and look over and say, "it's every man's dream.....whether they'll admit it or not".

Then the giggling started.  From me.  From him.  Back to me.  ....oh and then from the lady on the other side of him who heard every word we said.

Since more people know David than they know me there, they asked if he was the one making the commotion. I fessed up that it was I, as it is unlikely they heard his conversation. Maybe the laughing. But I'm sure they heard my comment about being in Hell.

I enjoyed our workout - and his company, but I always do. Well, at least about his company. Somedays I can do without the physical activity.  ....and there's always next Sunday for a repeat performance.

Song by: the Smiths
Posted by Blobby at 6:55 AM

I'm still laughing about David's comment. Because that's half the thoughts going through my head when I'm attempting most of those poses.

I remember my last--as in final--yoga class. Because I did something in public I don't like to ever do. I don't even remember what the pose was. But I do know that in the process of achieving said unnamed pose, a great wind exploded from a part of me that left me unable to do anything but laugh. And possibly cry at the same time. And then I could never go back due to sheer embarrassment.

That's so funny! This reminds me why I signed up for yoga lessons Perth with a close friend. Somehow it doesn't feel the same if I'm doing it alone.