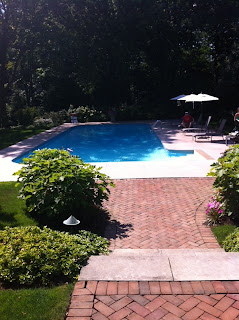 July 4th was hot.  Africa hot.  It was just miserable.

It still is.  And no true break in sight.

We had our annual holiday parade around the neighborhood, which I coated myself with SPF30. But I found every piece of shade I could find. I brought water for the dog, which he didn't drink.  No did he eat the popsicle I got him.

Then there was the picnic.  Not an ounce of shade back there and baking baking hot. We stayed an hour - it felt like 50.

But then......then it was off to a second cookout. A much smaller group, the promise of shade.....and more importantly, a pool.

Granted, I had some reservations about taking my shirt off with the neighbors, but the warmth makes you not care so much about this stuff.  No one looked.  No one cared.  I didn't get out until my entire body was pruned and my core body temperature dropped 10 degrees.

....and the yard is pretty frickin' awesome.

Problem was, I did eventually have to get out. Food called. Though I would have gladly ate this plate of fixins while sitting in the pool. 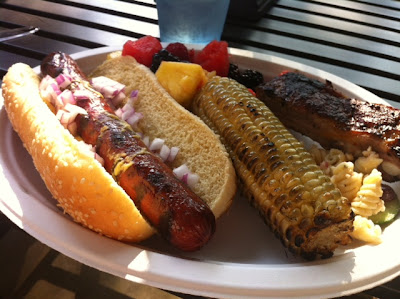 We brought the fruit salad. But the corn was good, the ribs were good and the hot dog was ok. If they actually made the chicken, I never saw it. It was too hot to get near a grill, so I just conversed with others.

In the meantime, my body temp was right back to where it had been before the pool.

I would entertain central air though. As much as we just spent on the bathroom renovation, if someone told me yesterday it would be $30k to install AC, I wouldn't have blinked an eye and wrote the check right then and there.

We always say we can do without it for the 5-10 days a year it was this hot, but now we are on two weeks in a row and again, no end in sight. I'm trying to say it would be worth it for resale - if and when that ever happens.

But I really just want to be cooler.

No central AC? Ho Lee Krap! I didn't know it rarely got that warm up that way. If it wasn't for all that cold you talk about, I'd seriously consider moving. Our (former) AC unit started running in mid-April and usually runs until about mid-October!

And an 11' deep pool? Does Greg Louganis dive there or something?

Don't bitch to me about Africa Hot until you march two parades IN UNIFORM in 101 degree heat.

A pool brings out friends you never knew you had!

That is the most phallic plate of food I ever seed.