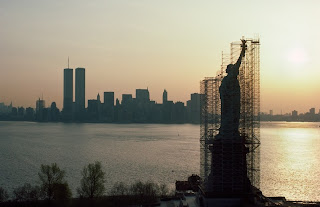 I suppose being free can come in a lot of different forms. I suppose that freedom can matter differently to any person in question.

For your huddled masses, they are yearning for that freedom.  That is what the holiday is about - I mean, after defeating those nasty Brits who cameth by land or by sea. Yes, 'cameth' is a word. I just made it up. They have to come from somewhere, ya know!

Yes, that whole Continental Congress and the Declaration thing that was allegedly signed on July 4th - and also marked the dates of death of John Adams and Thomas Jefferson (not the same year as the signing, of course) - is why we light off explosives. We were no longer under the rule of King George.  But since that 236 years, freedom looks different.

For, say, Anderson Cooper, being able to come out is a certain kind of freedom.  For other homos, it might be the freedom to marry.

Of course, Katie Holmes is where it's at in terms of establishing independence. Good for her. Tom Cruise has always creeped me out and though I know almost nothing about Ms. Holmes, I'm rooting for her.

That news made me think back to a Family Guy episode segment containing Katie and Ms. Cruise. There isn't an "official" clip, so you have to deal with a weirded put together one, but you'll get the idea.

I don't give much thought to the Battle of Concord or the ride of Paul Revere - even though I've been on the Freedom Trail two or three times.  I suspect most don't, other than those participating in Revolutionary War reenactments.

But wherever you find your streak of independence, celebrate that today - along with a kosher hot dog, some chips and a beer.

later today I will grill some hebrew nationals/chicken/burgers in honor of the day.

and as a woman, I celebrate the freedom to be what ever I want to be (a working woman), or not be (a breeder).