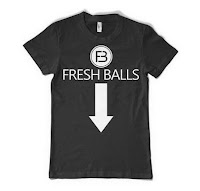 While I suppose this could be a Shopping with Blobby segment, it is not.

I guess even if it were, it'd be an Online Shopping with Blobby post.  But I don't have those.  So you get a SotM. Lame as it is.

710 sent this my way with no explanation. I'm assuming he thought I might use it some time, some how. That time and how is now.

Apparently there are some who don't like when men have sweaty balls. Those would be the folks at Fresh Balls.

I don't know who these people are or who they think they are.

It is possible that 710 was mocking me. Not that I have sweaty nuts - though I suppose some days I do. It has been hot out. Things tend to sweat, even my sac.  It is just life - deal with it.  Of course the silent mocking is because I rarely wear deodorant or antiperspirant under my arms - I'm certainly not applying it to my nether-regions.

There is always the chance he just sent it to me because of the name. One must not rule that out.

Before my female readers get bent out of shape that they don't like damp, and possibly smelly, balls, apparently they are no prize either - as there is the product Fresh Breasts - and we're not talking free range chickens.

There is also Fresh Feet and Fresh Baby Bottom.

I have a feeling it's like Miracle Foot Cream. There's a Miracle Hand Cream too, but I think it's just the same garbage in a different package.

I'll never know if it works, as I'll never be getting it.

What I really want is the t-shirt, of course.  I could even see 710 getting it for me and then not allowing me to wear it out - at least when I'm with him and getting the eye rolls if I wear it without him.

$15? If I want oatmeal on my junk (and who doesn't?) I can get it for $1.99 in the cereal aisle. I may reconsider if they rewrite their product description:

"For the first time there is a product that prevents wetness and the uncomfortable feelings of being sweaty, sticky, and chafing in the groin area, which all men suffer from."

I don't know how you guys walk around with those things. ;)

I'm just gonna stick oatmeal down my pants. It'd be cheaper. And if I--or someone else--gets hungry during the day....

And the other shirt on the site was kinda funny.