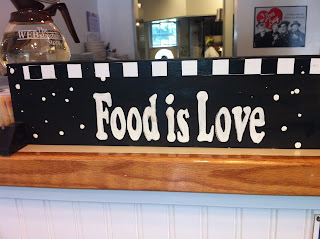 I figure I have one last vacation post in me - and it's all about food.

Oddly, I've maintained, even lost 2-3 pounds on or after vacation. I attribute it to all that beach walking and needing to stay camera-ready-slim. As it is, the camera adds 10 pounds, I hear.

I have to say (if I haven't already), the worst part of vacation was eating out. It's exhausting.  Seriously.

Maybe it's someone's thrill to eat their three squares out daily, but not ours. I miss the time we could eat in or make a meal.  ...and it's not the expense, or the wait for a table or even deciding where to go - though that has to factor into it somewhere, right?

Ogunquit is not known for any chains. Ben & Jerry's is the only food chain they have. the Life is Good shop is the only chain retail store they have.

I wish I could say more about their independent places to dine, one or two were really good, but most of them were average....and one was just downright bad, it's bad, you know it.

I really didn't snap pictures of most of our meals, but now and again.....sure.  For the most part, b'fast was the best and safest (and cheapest) meal out. It really did become our most important meal of the day. That we had to walk 1.2 miles each way to get it, I'm sure helped keep me less-fat.

But I'll step you through some of the meals - with pictures! 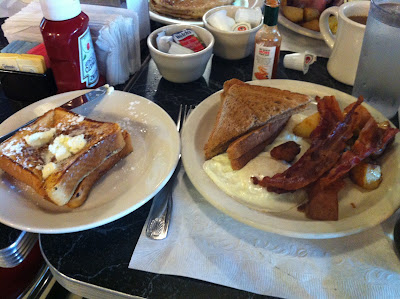 This was b'fast day 1 in Boston. Mul's Diner. Not Mel's.  No Alice or Flo. Just some South Bostoners. A disgusting amount of food for under $7. I ate approximately half of that they served and was bloated for the entire car ride the rest of the day. 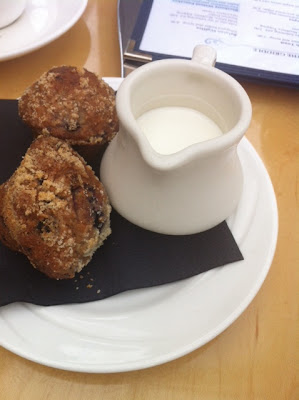 This is our "free starter" at Wild Blueberry in Ogunquit. The cream was for 710's coffee. My French Toast was horribly done. We never went back there. 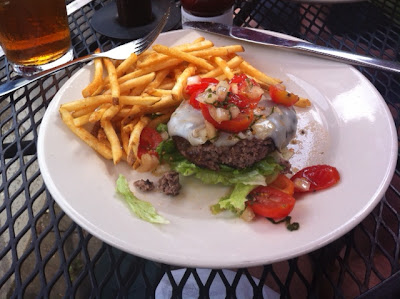 Best lunch we had was in Freeport. Honest to g-d, our server's (female) name was Zeus. How is that not hilarious?  Cafe Azure was great - good selection, reasonable and we had a god for a server.  I got a nuda el pomodoro fresco burger (no bun, with garlic, onion, tomato and olive oil on top).  Best lunch we both had.

Yes, we had lunch in Ogunquit, but noting special - a salad, or burger or pizza. All fine, nothing to write home about. Dinner was about the same  - at some of those same places we had lunch. 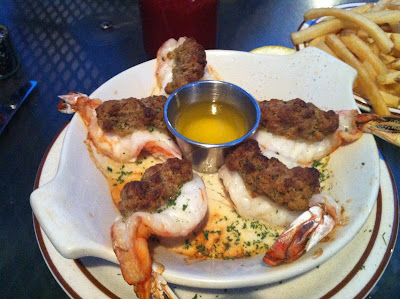 My one dinner pic: stuffed shrimp. Though nothing was stuffed. Bread crumbs were broiled on top of the split shrimp.  Yawn.  They were fine. This was down at Barnacle Billys, Etc.

I have to say we had one heinous meal at a place called Banditos. I mean, how can you fuck up Mexican food?  I'm not sure how, but they did. The margaritas were WAY overpriced and food and service just sucked sucked sucked.

It actually prompted us both to go on-line that evening and write scathing reviews on Urban Spoon and Trip Advisor. Physically, the place looked great, but it's a facade for a bad establishment. 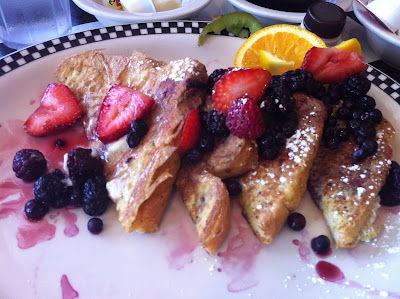 As I said, b'fast was out best meal. Cafe Amore's service was impeccable and enough to choose from that it was hard to decide what to feed my pie-hole with. But twice I had French Toast with blueberries, blackberries and strawberries. And syrup. I'm not a fan of fruit and syrup touching each other, because that is just wrong - but omg, it was perfection.

On another day, I got eggs ranchero. Beautifully done, but not picture.  Also these were the beepers for when your table was ready: 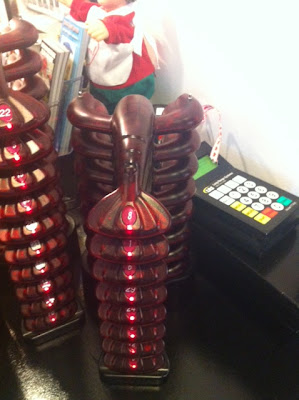 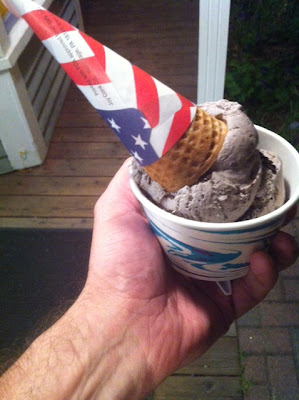 Twice (thrice?) we got dessert ice cream at Sweet Pea's. It was hot out, so I wanted the cone, but not enough for the Raspberry with chocolate and brownie chunks to melt down my arm.  Problem solved.  Man, am I high maintenance.

FYI. I bought that jaunty hat you saw in the video at the store attached to Sweet Pea's. I knew you'd want to know. 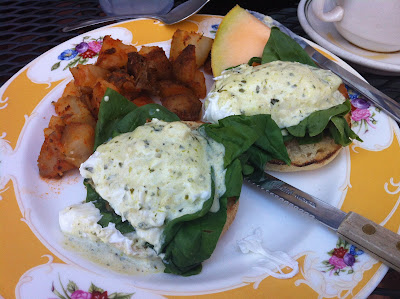 And then there's out last b'fast in Boston. Thornton's had great eggs Florentine. Je did not care for the potatoes that much.

Song by:  the Lovemakers
Posted by Blobby at 6:38 AM

Yeah, after a couple days of restaurants, I crave a sandwich and chips in my own kitchen.

I agree that most restaurants in Ogunquit are adequate at best. Next time, it's well worth the drive to the next town, York, to eat at Lydia Shire's Blue Sly restaurant.

alas, vacations are awful times for weight matters.
It doesn't seem worth a vacaation to eat right