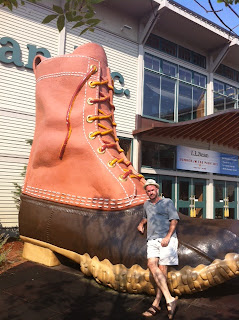 I'm just doing random updates from vacation. No specific order or anything - just thoughts that come to my head.

First - the main image. It was supposed to be a very stormy day yesterday. It was sprinkling when we got in the car and expected the 'severe' t-storms all day long. They didn't happen.

Last year we never touched the car except to leave Maine. Yesterday we drove north. We ended up in Freeport, ME - home of L.L. Bean.

I thought of former blogger buddy, Curtis, when taking this picture. He always appreciated my images of a building made out of a basket or a field of over sized cement corn. I was sure he'd enjoy a larger than life duck boot.

The campus (oh yes, it's a multi-building campus) is large and is a catalog come to life. I bought two henley t-shirts and a gift for Petey.  Hey, I'm a new dad!

On the way up to Freeport, we drove past Kennebunk and the adjacent Kennebunkport - you know which houses the compound of Bush 41 and 43 - along with Neil and Jed and all their spawn. 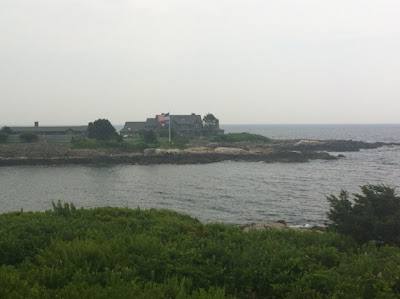 The compound sits on a piece of land where no one can get to, but all can see. The over sized U.S. flag that flies there seems like overcompensation to me - kind of like, my dick's too small; let's invade Iraq......twice. I found out later that Shrub Sr.and Babs were on-site for the summer. Had I known, I truly would have avoided.

Then there is this family of four staying at our resort. Mom, dad, son and daughter  Dad is kind of wicked hot - and by "kind of", I mean "for sure".  But the girl is like 16 and rides "daddy's" shoulders in the pool and behaved a little inappropriate. 710 assumed it was his girlfriend, but alas, it was not. It was just wrong.

On Monday, I was walking home from the beach  - and it's a beach town - so I had my swim trunks and sandals on, but no shirt. I'm at a point in my life, and a point in my workout routine, that I just don't care and getting sun was more important to me. I'm not a total embarrassment.  Then this 5 year old girl yells at me from the passing Lolly the Trolley - "hey! you're naked!".   I just responded, "YES, I am!" I figured her parents could correct her if they chose.


It seems that places call Lobster Pounds, are not shelters for crustaceans looking for their forever homes.

And then last little tidbit - we ate lunch at that place where the lady dined and dashed. We had the same server we too.  She asked if we were the ones who pointed out where the two culprits had gotten off to. I affirmed.  Alas they did not find them, though they looked. But an interesting note:  the lady had come in the day before the episode to ask the specials of the day.  She was fine with some tomato and shrimp dish until she was told it was on a bed of linguine. Apparently she had some frickin' meltdown over that one and started screaming.

Mind you, it's not like she ordered it, or ate it. Or that someone was force-feeding her. She didn't even sit down, just asked the specials. Clearly, someone is a little unbalanced. Possibly more than a little. Or pasta did something very very bad to her at one point.

Oh, and I'm contemplating doing another video blog from Maine, like (but not exactly like) I did last year.  We'll see.

That is it. Those are some of my current updates. More later. Probably. Possibly.

Song by:  Michael Penn
Posted by Blobby at 7:08 AM

Did they happen to have the left duck boot laying somewhere else on the campus, because that would have been... funny.

Glad you two are having such a good time.

You should be gorging yourselves on lobster as it is priced so low in ME right now that the lobstermen have stopped going out.

I knew you had a boot fetish, but geez!