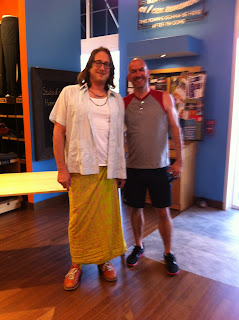 Oh, I might dance around the kitchen, but make no mistake, I cannot dance.

But a few weeks ago, I might have mentioned a challenge of going to belly dancing with David.  Last night was the night.

He was smart enough to dress the part, if nothing else to distract from his lack of dance ability.  I had nothing to hide behind.

Oddly enough, earlier in the day, I said "not to be too gay about this, but what are you going to wear".  I just didn't know what belly dancers wore, other than skirts that had coins sewn into them so they moved and made noise.

That we were the only two males in the class* made it hard to hide from anything or anyone.....even though we attempted to stay at the back of the room.

David turned to me and said I should title this 'Fifty Shades of Gay'.  To further distance myself from copyright infringement, I'd go with '51'.

But it turns out - I ain't got no rhythm.  Morty could tell you that from the Aerobics classes we used to take two decades ago.

It made me wonder how drunk I must have been when going out to gay bars to dance. Or used to go out and dance. It's been a long time since that's happened. And I didn't go out TO dance. I sometimes danced when I went out, but it was never the primary activity. It got in the way of drinking.   ...and cruising.

It turns out, the belly isn't really used in this dance. The hips, sure, but the belly? Not so much.

David and I had a number of laughs at our own expense, not others. Well maybe when the mantra of the women, when we were doing a move of "if you were peeling off a skin tight skirt that had been on all night" and the women chanted "I love my ass, I love my thighs".

That wasn't about to happen with the two of us. Even the Asian guy who came in late wasn't saying it.

Oh, and many many moves were called "juicy".

Yes, we didn't do it for the actual workout. We didn't do it to become belly dancers, or better belly dancers. We did it for the challenge, to hang out and to have some laughs.  As David texted me the day before: "it seems the most ridiculous thing we could do together".  And he was correct.

Of course now we'll have to find something to top this.  Oy

*two other men came in after the class was half over.


Song by: Gram Parsons
Posted by Blobby at 7:12 AM

Email ThisBlogThis!Share to TwitterShare to FacebookShare to Pinterest
Labels: Exercise

I am so embarrassed for you, your husband, your neighbors, your co-workers, your family, your pastor, and anyone else who claims you. This was the gayest thing you have ever done.

My best friend and I took a belly dancing class years ago. All I remember is being told to write our names with our hips--in cursive, dotting the I's and crossing the T's. It was a hoot.

Wow, I'm very impressed. Hubby complains we never do anything new or interesting. My response to that was to go online to buy tickets for Six Flags, only to get my bluff called when I saw they wanted an additional $20 just to park the car there.

Hubby may have a point.

you have more courage than I would have. at least you can say you tried.

But the question no one has asked: Where's the video? ;-)

While we didn't have the biggest asses in the room we certainly behaved like them. Thanks amigo.

Cool! I wish *I* had someone to go to a belly dancing class with!

I do love the soundtracks for these classes, I must say. But yes you need HIPS to belly dance.

I would have at LEAST chanted "I love my ass, I love my prick"