Hotter Than Mojave in My Heart 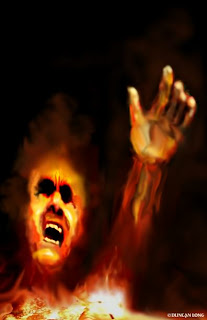 The Cure's "Hot Hot Hot" has been playing in my head for days - but I've already used that title and I'm really trying to only use song titles once, though I know I've slipped on a half a dozen occasions or so.

But it is Africa hot. It's like Mt. Doom, without the whimsy.

Climate change be damned. My rule about not complaining about heat be fucking damned. It already feels like I've been condemned to Hell, so let's roll with it.

Having no central air has not helped. Those little window units (my office and our bedroom) seem to struggle to keep up - especially in the office. The day starts out ok, but by 2-3p.....I'm starting to sweat. It doesn't help that Petey likes to lie in front of the fan.

I haven't felt good about him being outside in this heat. He doesn't seem to drink a lot of water, so I've been giving him ice cubes which he seems to enjoy. So for now, he's only outside on his walks and under a fan (or in front of) the rest of the day. He seems quite content.

Even Sophie endures walking past Petey to get to a cool place. Everyone of us hung out in the bedroom on Saturday - not a habit I want to do with Petey......but we'll see.  But he was struggling after his walks. Official weather said 98 degrees....my car said 102.  You gotta figure that heat on his paws was horrid, even though I tried to keep im on that grass and shady sides of the street.

For me, it's a 2-3 shower a day situation.  I can't cool down, which is almost never the case. Hot water doesn't even enter the equation when turning on the controls. I tried the gym a few times this week, but  it was draining. I opted to skip Spin yesterday. It can be temperature controlled there, but it's already a challenge to keep hydrated after a regular class without this warmth.

Each year we've "justified" not putting in central air for two weeks per year. I might be over that thinking right now. Of course, once we are in the '70s I will balk at that notion.

My parents call and tell us to come out and sleep at their air conditioned house, but I'm already in Hell, so why add to the misery?

I'm going to send you and 710 a package this week. Be sure to look for it on your porch. It will contain matching His & His crowbars for prying your wallets open and getting A/C installed ;-)

Also, you should be doing the hot yoga!

I just returned from a week in Alaska, which never saw the 60s. It is hard to imagine heat anywhere !