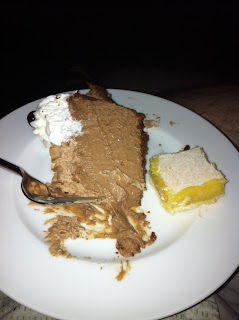 Of course, it feels like the dog days of summer............in Hell!  But you know me, I try not to complain about the heat, since I have opted to bitch about the cold.

These days, hot as they are, seem interminably long.  You get a slight reprieve - slight - at 06:00. After that, it is all downhill.

Without workout, it is a two shower-per-day day. Three a day if the gym is part of the schedule. Oddly enough my skin is not yet dried out.

Last night was the last dinner in the house of a friend. You'll remember his partner died a few months back and he is in the process of selling the residence. But for some close friends, there was a dinner, drinks and dessert.

Ruckiry (not Jon's boss) for me, we walk home, so the amount I drink isn't an issue, unless you're my liver.  Then, it's an issue.

Marty will be sorely missed. I know he's moving from the 'hood and we have the greatest intention of staying in touch with him regularly. But we know that will be work. And there is the distinct possibility he'll want a complete clean break from the neighbors. But I'm thinking we might make the cut.

It was a nice group, but not a close group.  Folks we had seen before but only had interaction at this house. Still we felt special to be part of this crew - as it was small and everyone got along so well.

The food was minimal (compared to other events held here) and the two desserts (seen above) were grand. Yes, I'm gay, so I say things like 'grand'.

You get what you get folks.  I have to be up in a few hours to do hot yoga with my cousin. It's not a 'hot yoga' class, but it will be pushing 90 by the time the class starts, so I think it qualifies.

Song by:  Rise Against
Posted by Blobby at 7:14 AM

Summer has not even arrived here and it is already July. I am tired of these pleasant temps, I want some sun and beach time!