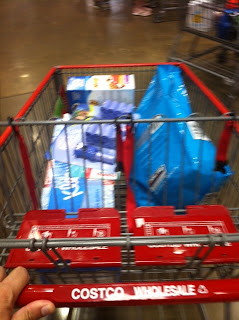 Sometimes there are just harsh realities one has to face: mortgage, jobs, wills and such.

While I am under no illusion that I'm some cutting edge kind of guy who lives this incredible life of leisure and spur of the moment events, but Sunday was an eye-opener.

Our friends and neighbors (Tom & Sal) are huge fans of Costco. We had a membership the first year they opened here, only because the first year's fees were free.  ....and you know I'm all about the cheap.

We went once. Once!

We are two men with no kids. Tom & Sal are too, but these guys go weekly.  Weekly!!!

Somehow, a few months ago they talked us into trying it again. We went, but didn't purchase a membership. We walked around and around and around. I suppose joining this kind of shopping establishment works if you have a family of six.

Marge Simpson came to mind as I wandered the aisles: "oooh, that's a good price for 12 pounds of nutmeg!"

It ain't far from the truth.

When I overheard a man say to his family, "ok, everyone stop!  We lost grandma", I had to laugh.....and leave. I was done.

But we're family men now. And our son has special diet needs and food allergies. His food comes from - you got it - Costco.

While waiting for 710 to get our membership cards, I'd say half a dozen folks left the store with these oversized teddy-bears.  And I mean, they were 5' tall. One person had THREE of them.  WTF.

Sure enough, when we went in, there was the display of them for the low low price of $30. This is a necessity?  People make and sell these in bulk?

As we looked around, again there wasn't much to buy if you weren't feeding the Von Trapp family. And it seems you have to use all the food in five days after you purchase it. Again, I suppose if you're feeding an army that isn't an issue. But for us, it means rebagging and freezing everything. Hardly worth it.

You can't buy one pork loin, it has to be two. You don't get a choice. Or the prepackaged cold cuts - like 7lbs of them. I don't want that much sliced turkey!

I'm thinking if I buy 4-5 bags of dog food a year, we'll break even on the membership fee. But other than that we just bought a gross of paper handkerchiefs, a bushel of granola bars and some of that CQ10 for my ear ringing problem (which isn't working).

Pushing that cart out the door made me feel like one of those housewives from the 'burbs. It was unsettling  Not only wasn't I feeling like a hip gay man (which I've never been), I felt that I was one Costco visit away from wearing mom jeans.

Email ThisBlogThis!Share to TwitterShare to FacebookShare to Pinterest
Labels: Growing Up, Shopping

I actually had to Google "paper handkerchiefs".

We don't have a Costco near us, but we have the Walmart version: Sam's Club. Of course, we mostly shop there for the businesses. But every now and again it's hard not to buy a 6 pack of baby grand pianos. ;-)

We plenty of Costcos and Sam's Cults in Southern Ca

Our local trough shop is BJs. We only ever go when having a party, which is a great time to buy in bulk. Otherwise, we never go.

Someone goes to Costco for select items; we too don't have room or time to buy 50lb of paprika