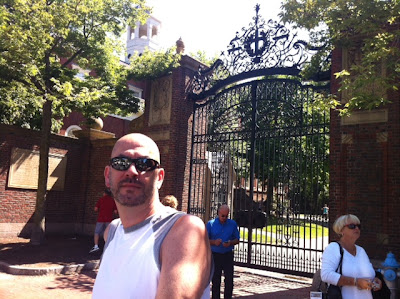 Glad to be home and in other ways, sorry to be home.  Vacation was great....as you've read along the way.

Now and again, during time away, 710 and I will even take time away from each other, just for space.

This did not happen this trip and all was fine, not that we anticipated strife.

Well, there was my drinks with BosGuy that we were apart, but that's it. ...and some bathroom time.  But that's it!

Our last day in Boston was beautiful. Mike or Peter asked if I was going to write about the three car accident we saw, but like I told them, it wasn't me having the accident, so no.....no I'm not.  (Two people walked away, one went bye-bye in an ambulance......that's all I know.)

But yesterday morning we were up at the crack of dawn in our great room at the Westin (I can't recommend the rooms enough - though the lobby was horribly crowded at all times!) at Copley Square. So it was out to b'fast. No worries, I'll be doing a blog post on vacation food soon enough.

Since we had hours to kill before our flight, we went back to the Hubway bike system and rode up to Harvard. Trust me, this is the only way I'd ever get to Harvard. Now I know just how Paris Gellar felt.

It was a nice 6 mile ride along the Charles River (each way), where we saw Harvard and Boston University rowing teams practicing. I so wanted to get a picture of a store in Cambridge called the Tennis & Squash Shop, but I didn't break my ride to do that.

Only at Harvard (or maybe Yale) would they have a shoppe for Squash (and, well, tennis).  Of course, you have to say 'squash' with that affected Ivy league voice that has your bottom chin moving more than ever parting your teeth.  You know the one.

Damn there are a lot of pretty handsome men in Boston what we passed on our bike ride. A LOT! Yes, most of them at the par course I mentioned a week or so ago, but damn!

Anyway, Sophie was very very very happy to see us. That my interpretation of her yelling at us for two hours straight. I'm sure she wasn't giving us lip (if cats had lips) for being gone so long. We'll see how she does today when we go pick up Petey. I bet she thinks she was rid of him, but she's not.

I'm very excited to get Petey and bring him home this morning. I hope he feels the same way.  But laundry is half done and grocery shopping has been achieved.

Song by: Carole King
Posted by Blobby at 6:50 AM