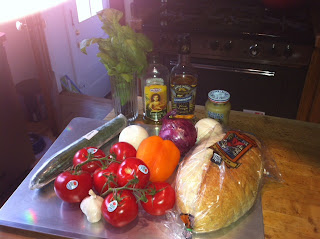 For our neighborhood picnic on the 4th, I decided we would make Panzanella.  It seemed light. It seemed refreshing. It seemed like something I didn't have to cook on a 95 degree day.

It turned out fair at best.

It also turns out, there doesn't seem to be a recipe for Panzanella. There are a thousand, and all vary by degrees. Some have cucumbers, some have olives, some have capers and some have peppers. Some don't have mozzarella. Don't get me started on what kind of bread to use or not use.

I probably should have stuck with a recipe, and for the most part I did, but I tweaked and that might have been the death knell. Or I just picked the wrong one.

I chopped. I sliced. I dried out the bread. I mixed. Still it had little flavour and the bread was mushier than I thought it should have been.

Some recipes had you mixing the concoction anywhere from 30 minutes to 12 hours before serving. We did ours an hour before serving and the bread was too mushy. And depending on the recipe the vinegar to use is red wine, champagne or balsamic. Which was the right one???

I opted for champagne, at it wouldn't colour the bread or mozzarella  - and I like champagne vinegar. In retrospect, red wine may have been the better choice.

It wasn't horrible or anything, but I wasn't feeling it. I've had good Panzanella before - this wasn't it. But I'd try it again, or try to make it again.

The picnic weather was so hot, we only stayed like 45 minutes, so I don't know how much of it people ate - or if they came back for seconds.  I didn't.  But I'd try again. 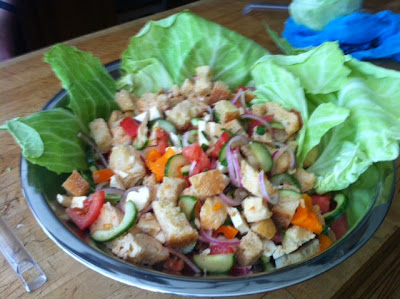 Song by: Todd Rundgren
Posted by Blobby at 6:30 AM

Panzanella is my go-to salad of the summer. My tricks are: toast the bread cubes; balsamic vinegar (because I like the bitter); and lots of sea salt and fresh cracked pepper (taste as you go)!