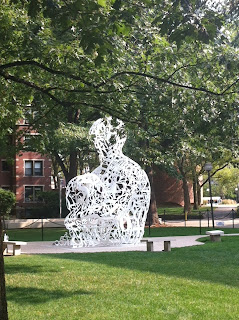 You know how my work travels are fairly painless.  Airport to car to hotel - oh and that client thing. Leisure travel was a frickin' nightmare the other day.


Until we started to land, the flight was ok, but apparently we were too close behind another plane and the wake make our plane really jump and tilt. Then it was onto the rental car area.


No reservation that they could find by name or number. Lo and behold when taking my Fastbreak number they found it - and found another name attached to my account, though it had my home and work info and my credit card info.  Eeek.  Finally got that figured out and onto the hotel....


No worries, we got the room and it was off to a very late lunch. Granted we were hot and hungry, but Charley's really hit the spot. And the service was great. We tipped heavily. She totally deserved it. I ever mentioned her to the manager.


But walking around Boston is always great and even more we did Bixi Hubway. 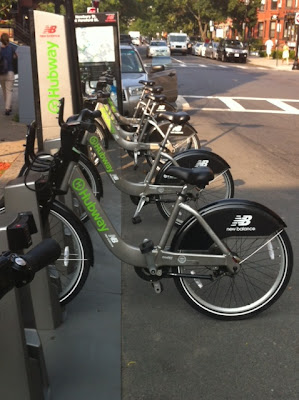 While the bikes at Hubway have three gears, they may as well be fixed-gear ones. They're not meant for heavy riding, but commuting. And there are no helmets to rent. I don't recommend riding in the city without one as we did.


I'm happy to say, while we didn't have helmets, almost every Boston biker did. But we rode around downtown and up and across the Charles over to MIT and the surrounding area. I didn't get a snap of some of MIT, but there was a group of two dozen 13 year old Asian kids and I wanted to just say "freshmen class".


I love these cities with bike-sharing programs like Montreal, DC and the likes. It's a great way to see more of the city you might not or can't normally do. Such as riding along the river and seeing quite a few incredible men on the par course.


I so wanted to take the picture of one of them, but I was dissuaded. Incredible bodies and bits of show-offs. They've probably had their pictures taken willingly and unwillingly. I shoulda done it.

Greg and I will be looking around DC for this bike sharing thing you've written about several times. We sold our bikes in our yard sale a couple of weeks ago, so renting one occasionally sounds like a good plan.