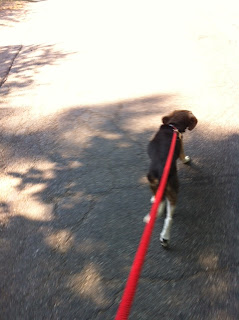 I should be thinner.

That's just not a statement of vanity, but of logic as well. Though I am totally fine on the vanity part.

We've had Petey a little over two weeks now. He gets 3-4 walks per day. Sometimes five. Most of them by me.

I should be thinner.

For not being leash trained, the old man has come far in the last two weeks. He pulls sometimes, but not nearly as much as he had at first. Not even remotely.

(for the record, the title image was taken on day #1, so he's really not like this anymore.)

Yes, we still have the unintended squirrel sighting, but I'm getting much much better at seeing them first and diverting his attention - though he always picks up the scent.

But through a series of standard behaviour stuff, he's much more obedient on these walks. He's not perfect, I mean, who is?  - but he's not the doggie we got a fortnight ago.

Like a spoiled child, he doesn't exhibit this kind of behaviour in front of strangers or neighbors. It's pull pull pull or just lay down and ignore - and then suddenly he weighs 4,872 lbs.  He's going nowhere.  Which is why I carry treats in my pocket now.

Apparently you can teach an old dog new tricks.

I'm totally killing the 10,000 steps a day rule.  And this is on top of my weight lifting, rowing, spin or yoga.  So why am I not thinner?

I've weighed in twice since getting him and still at the same mark. I know I'm not eating more - except fruit. Pushing water. Lots and lots of walks in the hot hot sun.  Why am I still the shlub I was?

On a note, he's met most of the neighbors and their dogs and everything has gone well. And he now knows the neighbors who have the treats. What a schmoozer.

Maybe you should take him for a jog. That might kick things up a notch.

HUGE flaw in that plan. Then I'd have to job. Not happening.

When I studied nutrition, my professor said when it comes to weight loss, exercise is '3' points and diet/calories is '7' points to total '10'. This was to illustrate you can't exercise enough; you have to cut down the calories. One cheesecake slice = 3 hours of walking and who has time for that? Maybe this is the key.

Definitely NOT a schlub. Go take this test to help you feel better:
http://www.bbc.co.uk/news/health-18770328