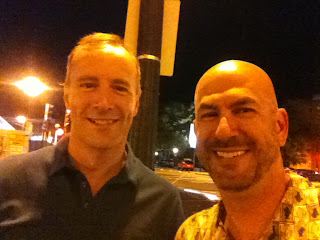 Seven is a lucky number, right?

I've been following Mike for years and for some reason he reads me - and for content, which is a little disconcerting. No one reads me for content - even me.

But Mike is my age (well, naturally he's a little older - lucky me) and he's as handsome as he is wise and funny.  Take that anyway you like.

And while seven is lucky, third time is a charm.

Last year Mr. Short Attention Span blew me off for P-town and last weekend he blew me off for his "sister". This time he figured he'd just cut his losses and rip off the band-aid, figuring he could put it all behind him with the help of intensive psychotherapy.

All kidding aside, we got along swimmingly, as I knew we would. Just through writings and emails we play on the same level and I found kinship with Mike. Not bad for the blog world, no?

We met for drinks and had dinner as well.

I not only got to meet Mike's partner, you know the one who provided the heinous recipe for sausage and veggies (I kid....I kid).

Yes, you heard that correctly.  710 came with me for drinks and dinner and I think we had a great time - all four of us.  Of course, I gave Peter a faux-hard time regarding the recipe, but it was all a joke.  I'm sure however he made it was the correct way. {sigh}   My, I hope he knows I was kidding about that.

Conversation, jokes and jabs were all around and no one was entirely embarrassed until it came to picture time.

Oh, we tried multiple cameras, multiple angles etc and it's not that I didn't trust Mike to be the keeper of the images (though I totally didn't), I'm hoping his pics came out better than mine. Of the 5-6 on my phone, I found the one above to be the only usable image. Well one where he wouldn't come hunt me down.

Sodium street lighting is not our friend, but iPhone flash is even worse, so you do what you can. Olan Mills wasn't open to take our portrait.

Honestly, I had a great evening and would hope to do it again, here in Boston or host them if he and Peter ever made it to Cleveland.

Oh, and like many some of you, Mike has taken me to task for some of my My Music Monday selections. He's asked for, and received, permission to guest blog one of his own. Lucky him.

I have an idea of what he will pick, but that will surprise for the rest of you. .

Of course, he actually has to write the post.  Don't hold your breath just yet, but keep your fingers crossed. Either way, I don't think you'll be criticizing my selections any longer. So I'm lucky on that one.

We're all lucky.  It was the perfect end to a great trip.

See, I read the fine print.

II miss his posts, Mr. Short attention span. I hope you inspired him to take it up again.

Oh Bloggy -- after years of exchanging barbs and snappy witticisms (well, you TRY hard), we finally got to meet face-to-face. And it was a delight! Add in the bonus of meeting each other’s partners, and you’ve got a winning Friday night. It was terrific to finally meet up – you and 710 were perfect cocktails/dinner companions. Was so glad we could make it happen.

I think the photo came out pretty good, given the tough lighting and post-martini conditions. (Is that a giant UFO over my right shoulder?) I did grab a couple of extra photos on my phone…I’ll send you one that I think is much more life-like and complimentary if you feel like posting.

Welcome back to your home and your pets and your “real life”. As we discussed on Friday, although I have been traveling a bit for work, I never have a business reason to get to your hometown. I’ll have to work on that. If we do make it out your way, we’d love to take you up on your offer for you to totally vacate your home for us – and let us eat all your food and empty your liquor cabinet. That offer is sooooo sweet. Thanks in advance.

From across the blogosphere,
- Mike

Cool beans! You don't want me to guest MMM for you. I'm all about the pop music baby. And jazz. And salsa. And bossa nova (which has just turned 50 btw.)