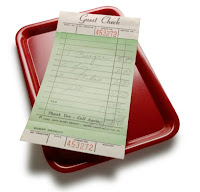 I leaned over to 710 and asked "is that woman boring holes into me?"


She was at the next table, and granted I was not dressed up at all, but this is a beach town (did I mention we were back in Maine?) and it was 90 degrees. I mean, the guy behind her had a tshirt of cartoon dogs sniffing each other's butts.

I think we were both correct.

She had a poorly done Anna Wintour 'do and was a little gaunt in the face. She appeared to be alone.

Since her table was to my side, I wasn't always paying attention and she was majorly creeping me out as she watched me eat my so-so parmesan encrusted scallops.

I had also noticed a man walking up and down the way to the restaurant but never paid him much any mind. I certainly didn't notice him take a seat at her table.

While she was by herself, I did notice, but not pay attention, to her asking the waitress questions and ordering something. Then there was a time I heard her ask where the restrooms were, but I was paying far too much attention to the gaggle of gays in the corner of the bar and how all the homos seemed to know each other except for us.

Then there was a slight commotion from the faux Wintour, which is when I noticed the male with her. "Awful" I heard her say. Then she and her "husband" got up and left.

As I was not fully paying attention, I did ask 710 if they had paid, and we agreed they dined and dashed. Or considering they were in their '60s, they walked away, as "dash" probably isn't in their vocabulary let alone exercise routine. We alerted the waitress, who alerted the hostess / manager. By then, these two had disappeared into the crowd of the foot traffic on the street.

Looking around, others clearly had noticed too, but said nothing. In my mind, I back-storied that they go from place to place getting free meals by eating part and leaving before the check arrived after feigning disgust with the food or service.

After our meal, we walked around town and hit Bread & Roses, for what turned out to be a disappointing single-serving chocolate silk tart, we were approached on the street by the woman who dashed - no husband.

Assuming we had some connection, she begins to prattle on about her 'awful' meal (though she thought my scallops looked good - ick!) and I think thought we'd be on board with her not paying and just fleeing.  She was wrong - and I let her know it.

I told her she had 'dined and dashed' and she did not disagreed, because it was a bad meal, she tried to justify. Others would have mentioned it to the owner or server - she did not.

I said she was wrong and rude. Apparently I said it strong and loud enough to get more than a few heads to turn our way. We walked away and she yelled after me, "well then why don't you go pay for it!" with folks still looking on.

I went and told the hostess where she and her husband were sitting if she wanted to do anything about it.

I hope she did.

Don't know about that restaurant, but it's common practice to make the server pay for any bill left unpaid. They "punished" the one who gave them the food, not the one who made it. Such arrogance.

f-ing rude! a woman that old should have manners (says the old lady).

how would she like it if someone did that to her? karma will come back around and bite her in the ass sooner or later.

Hurrah for you both! Totally the right thing to do, in my opinion.

Applause! People are so weird!

indeed good job; I think the more we point out rudeness and injustice people will less likely do it.