Yes, I know the river going through Boston is the Charles and not the St. Charles, but I needed a title - and it's close enough.  Sue me.

We had to leave Maine yesterday.  I hated to leave, but we couldn't stay forever, so it was just as well.  My bad leg was hurting (it still is), which indicated what the weather channels confirmed:  low front on the way.  60% thunderstorms.

We opted not to try another day in Ogunquit where we might have to sit in the room if it rained.  We could do stuff back in Boston in the potential rain.

So we did walk down the the river and hang out on some docks that they have there with some chained down Adirondack chairs.  We had nothing to do but look over at MIT and watch sailboats on the river.  It was a relaxing way to pass the time.

But my big to-do was to meet up with another blogger.  Yes, BosGuy and Mike can eat their hearts out.  They totally blew me off for Provincetown.  Can you believe it?  They wouldn't alter their vacation plans for my vacation plans!!!  They are so selfish!!!

They were great about my travels and anything they could do to help with my trip to Boston.  Alas, my big idea was to have a mini-blogger meet-up with the two of them and John., from I Got Somethin' to Say.

So John and I did get to meet up - and it was great.  We had a really nice time and once again, it was a comfortable time - no awkwardness - at least on my part.  John is blogger #5 that I have had the pleasure of meeting.

John was the guy I sent the Spo shirt to once I had taken my pictures, so it was a nice 360. 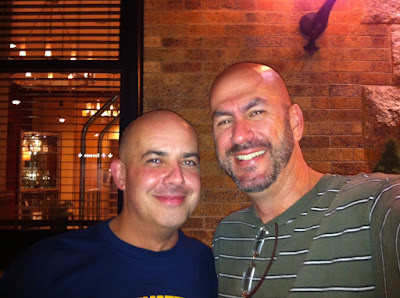 It was a nice few hours of walking through Boston and stopping by for two beers.  Then I had to get back to my hotel.  I mean, I left a certain man back there to watch 30 Rock.  It's not that he didn't want to go, but felt a little out of the loop, and I get that.

My leg still hurts, so I'm anticipating some iffy weather today, but hopefully the last day here will be a nice one.


Song by:  Jefferson Starship
Posted by Blobby at 6:54 AM

You two look great, and I'm happy to see someone smiling! Where was Jim?

I don't know if others are affected, but since you put the video on yesterday's post, your blog takes forever to load and scrolling is a nightmare. Maybe when you get home you can replace the video with a link to it on YouTube (or wherever you keep your vids).

I am mad-jealous! I would like to meet him some day too.
And you two make a handsome photograph!