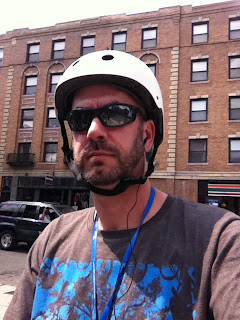 Our last day in Boston, we did something old and something new.  We opted to do a Segway tour of Boston.

Not with the town.  Not per se. It's clearly a great town and rich with history, much like DC. What I was not impressed with was the company - Boston Gliders.

OMG, operationally, they are horrible. Just horrible. From the check-in process to the video instruction, to the orientation to the Segway itself.  That's not even the distributing of gear - headsets and helmets.

The tour itself started 20 minutes late due to the tour guides not clearly delineating the 1 hour tour from the two 2 hour tours - all starting at the same time. Or the douchebag rider who was hotdogging while we were getting ready to go and crashed and wrecked a Segway - which is actually hard to do.  I had a little bit of satisfaction seeing him lying in the street, pride hurt - and maybe part of his scraped leg in pain.

But the tour seemed a bit hodge-podge.  In DC, we got off our Segways once.  Here we got off a number of times - and for 10-15 minutes a piece.  For a two-hour tour (which didn't go a full two hours, since we started late), a half-hour of not being on the vehicles is a huge chunk of time.

And while in DC, we went to most sites we had seen before, the guide had good info on them. We had seen everything we toured in Boston too, but the guide was not all the knowledgeable and the audio system was 90% static - useless.

I could not recommend this company. There might be others in town that do a better job. I do love the Segway, and the tours are fun, but you really need a good group and a good guide.  These things ain't cheap, so make sure you do it right.  Trip Advisor be damned with all the good reviews....I think they were all submitted by the staff.

That is a great bit of info you shared. I've contemplated doing this with guests in the past and am glad its never worked out. I'll pass in the future when we talk about this.

a disappointment; no fun in this.

When we drove around the battlefield at Gettysburg, we encountered a Segway group, as well. They seemed to be enjoying themselves. Not sure I'd want to try it in Boston after your expereince.