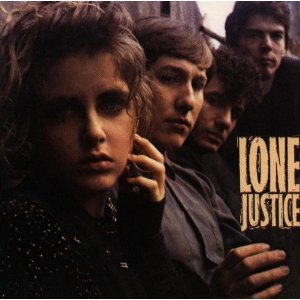 Debut. Shmebeut.  Lone Justice only released two albums, by basically two different versions of the band, but in my estimation, their debut, eponymously (is that a word?) titled disk is the stand-out.

Rockabilly, CowPunk or whatever you want to call it, the success of the disk was equal to the band and Jimmy Iovine who produced the album.  Yeah there were a number of session players, but the core band was solid.

And what a vocalist they had in a then 19 year old Maria McKee.  Strong.  Confident.  And yes, sometimes angry.

10 songs and coming in at under 36 minutes, each song is great in their own way.

I would say the "cowpunk" moniker only applies in four songs:  their "hit" "Ways to be Wicked", "Working Late",  "Soap, Soup and Salvation" and my favourite on the disk "Wait 'Til We Get Home".  The rest might be considered rockabilly or just alt-country.

Yeah, there's a heavy Tom Petty influence/vibe on the disk, but that comes from some of the Heartbreakers making an appearance and that Iovine and his team were heavy into producing Petty & crew at the same time.

I get that one has to be in the mood to like Lone Justice - the band and/or the disk.  I get that many might not be into alt-country rock.   Still they are well crafted songs and expertly sung by McKee.   I have my favourites - "Ways to Be Wicked", "Wait 'Til We Get Home", "Sweet Sweet Baby" and "After the Flood",  but it is one of those albums that really does not have a bad tune.

26 years old and the songs have held up well.  The don't show age and you'd be hard pressed to figure out a year they were released.  To me, that's a sign of a great, or really good, record.
Posted by Blobby at 11:51 AM

Wow. I like After the Flood a lot, but Wait til We Get Home is my fave, too.

I love cowpunk, even tho this is the first time I've heard the phrase.