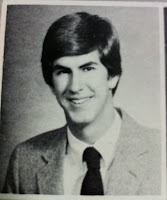 Now and again, I find myself doing things I might not necessarily want to do,  like climbing into an oversized novelty shoe things in Vegas casino,  or working.

This time it was the biggie.  The major kahuna.  The ultimate sacrifice....all for you!

I went to my 30th high school reunion.

For the record, I went to an all boy's school.  It was a good 45 minutes away from our house, so most of the people who attended were nowhere around where I lived.  I wasn't unfriendly, but I can't say I had (m)any friends.  Partly by choice.  Partly by knowing who I was and didn't want them to know.  And partially due to not having access to these guys since I did live so far away and wouldn't have my driver's license until well after these bonds were established and set.

The reunion was going to be a bust from the get-go.  I knew this. I'm not a party-planner, but anyone could have, and should have, seen this coming.

First off, we had 151 people graduate, back in the day.  I know two of our class who have died - probably others, but I only know of two.  But in the email invite, there were only 79 names.  We're down to half the class right there.  I don't know the norm for attendance for this kind of function, but let's say it's 50% - and you know that's high - you're down to 40 folks.

They planned three events over a week's time.  So since you know everyone won't do all events, all of them have been watered down.  And if you do the golf event, you're stuck with the same three people for five hours.  Horrid!!!!

If you ever argued against the notion that life wasn't just an extension of high school, I'll give you this nugget which I think sums it up all that well.  Honest to g-d, this was closing remark of the invite!!!:

We’re looking forward to seeing SOME of you.

I did not change a font, an uppercase or an underline.  Yes, I know this could be taken many ways (ok, two!), but it's high school + 30 years.  Knowing who it came from, I am pretty sure I took it the appropriate way.

I opted to attend not the Kiss-thing or the golf outing, but decided on the dinner, which was last night. Here. 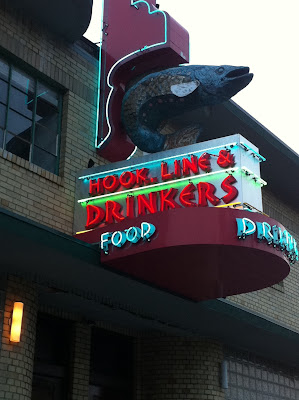 Calling it "dinner" would be a stretch.  It was a cash bar and whatever you ordered off the menu which turned out to be sandwiches at best.

The oddest thing of all:  the event didn't suck.   Of course, there was a bar, so the more I drank, the better it got.

A quick tally probably only had 18 guys show. Some with their wives.  Most by themselves.  I recognized almost no one.  The Lombardi twins looked exactly the same - to each other and from 30 years ago - and so did two others.  Everyone else - not so much.

No one recognized me.  Not one. Again, given I had no close friends at school (or semi close, pseudo close, or quasi close), so my expectations were met with this non-recognition thing.  .....and let's face it, I don't much look like the guy in the title image.

The first guy I ran into, even after hearing my name, had no idea who I was.  That was ok, it was reciprocal.  Never heard of him or remember seeing him.  There was another guy whom after getting a name and such, I still didn't remember, but a number of guys asked me who he was and even after getting his 4-1-1, no one believes he was in our class.

Yeah, there was one blowhard, who has not changed at all - looks or bravado.  Telling stories as big as the sea, that had guys rolling their eyes - and me just calling him out on them (thanks to the help of Red Stripe!).

But the jocks mellowed and were not so clique-y. The guys, like me, who were seemingly invisible those four years, had mostly come into our own and socialized fine.  There were stories of other students and some teachers.  Inevitably, the phones came out so people could show their kids.

And of course, the question of my wife and kids came up.  Asked and answered.  I should have taken my phone out to show them pictures of Sophie.

No one seemingly had trouble with the gay thing.  Two off colour comments made, but not to or about me.  One was one of the Lombardi's asking where is 'fag brother' was.  The other was a question to me if Tom Nagy had slept with our British Lit teacher - who was clearly gay.  Actually, it wasn't a question, but kind of a statement that they asked me to confirm - like I knew  I couldn't imagine Tom sleeping with this guy.  I couldn't imagine any guy sleeping with this teacher.

There were a few pictures taken, none by me (I know, right?).  So when / if those get sent my way, I'll have another post for you.

Now it's time for breakfast and to take a look at my yearbook to see who the hell some of these people were!

Like the HS photo. A bit Bieberesque, if that's a word.

God, there's rumbling on FB about my 30th. If I'm in town, maybe, but it definitely isn't a priority. I've not gone to any. You are brave and why didn't Denton man up anyway?

Love the yearbook photo!
Our reunion was at the Skating Club and the Rock Hall.
We did not sweat the small stuff, and discovered we would have felt better in HS if we had realized, we were all going through the same things!
Good to see your age represented.

it will be my 40th next year; have NEVER attended and never will. no friends, bullied, all-girls catholic school (yeah, you get the picture). fuck them! I have also never given them one thin dime since I graduated.

high school is hell on earth; wish they had had cyber schools way back then!

"I don't much look like the guy in the title image. "

Uh, based on recent photos and videos that you posted, I think you still do look like that fellow based on the eyes and the smile. Of course, a high school portrait is posed. I used an adolescent scowl on a day to day basis in high school, so not everybody can make the connection.

Great photo -- and confirmation that, for good or bad, we're the same age. My 30th high school reunion was held a few weeks back -- and just like the 5th, 10th, and 20th, i opted not to attend. Then again, there's not bash at the Hook, Line, and Drinker to lure me in! Good for you for going. you can know check that off your bucket list.

Think of it all as blog fodder; your blogger buddies appreciate your sacrifices for the sake of our entertainment.

My 20th is coming up soon, so I'm nervous but excited. BTW, you were a cutie then and now

"trust me, in this bar, she still would have been looking like she was going to a royal wedding." Dammit! This made me spit my coffee all over my screen!

All boys high school, huh? You know what my next question is, but this is not the appropriate venue for that...