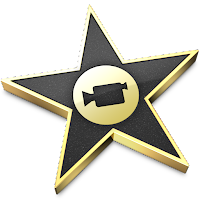 I don't think it would be any surprise to you all that my App of the Month selection would be iMovie.

For those unfamiliar with iMovie via Apple, the full version, for laptops and such, is a pretty slick product that not only helps you film videos, it is pretty good at editing, arranging, adding music and doing special effects as well.

Even for the novice, it is somewhat intuitive, and trust me, I am a novice.

I have edited some of my vlogs on iMovie and definitely did for the Jiggy Whore Dance I did for brettcajun almost pushing two years ago.

Becky used it for the video we posted a few weeks ago - and clearly is less of a novice than I.  Or has more patience......or both.

I do not do enough with it to feel totally comfortable, but when in Maine last week, I downloaded the iPhone app so I could edit and post the video that was shot on the beach and around the town.  In theory I could have waited until I got home to do it on the Mac, but I was impatient.   Shocking!

You can clearly do some things on the iPhone that replicate the full version:   add music, theme songs, fade in and out of black.  You can record voice overs or anything you want with the built in recorder.

My biggest issue with the app is the difficulty it is for editing.

In the big boy version, you can grab certain frames and place them wherever you want.  Easy Peasy.

In the mobile version, you have to take your original video and 'trim' it  - even if you only want 3 seconds of a 4 minute clip - save it (and save it as a new file or you lose 3:57 of the original clip) and then insert those 3 seconds where you want it.

Personally, I like just highlighting those 3 seconds and dragging them to where I need them - and then I'm done.

And let's face it, working off an iPhone for a video project is nice, but it's difficult....even if you had full functionality.  You're working on a much more limited platform and some of us have fat thumbs.

I'm having a hard time imagining using this app on my iPad with my large fingers. How you could do it on a tiny iPhone is beyond me. But for five bucks it might be fun to play around with.