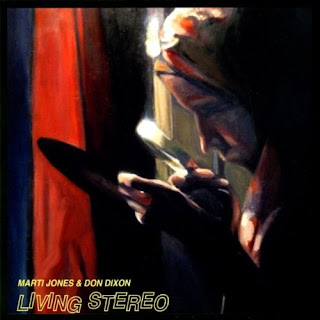 Who knew?  Marti Jones and Don Dixon put out an album in April and I missed it.  I had no idea it had been released. There might be a reason for that though.

It pains me to say it, but Living Stereo is not good.  Marginal at best.  At BEST.

The pain for me comes that Jones puts out so few recordings - last was 2002's My Tidy Doily Dream - and has never truly put out a bad record (two were better than average, but not her stellar stuff) and the selections on this disk does not measure up.  Hers or Dixon's.

It doesn't help matters that a few songs seem to use some instrument that sound like a Fisher Price piano / xylophone.  What's up with that?

As the co-billing suggests, they sing - together.  They have done this before with good results.  Really good results, but it might be one song every three albums. Not one album, every song.  This is a usually a bad outcome (Robert Plant & Alison Krauss or Mark Knopfler & Emmylou Harris).  Living Stereo is no exception.

I can live with "Trouble is as Trouble Does", "That Scorching Song", and "These Arms of Mine".   I like their cover of the Shoes' "Only In My Sleep", but it's about 10 years old from a tribute disk to the Shoes (a band no one knows that everyone should!).

A bad album from almost anyone else I can deal with. But a voice and talent of Jones, that I really appreciate makes me lose a little faith in the world.  I like Dixon too, but his stuff works even less than hers does.

Maybe it won't be 10 years till her next album.  Maybe it won't be a disk of duets.  I hate to say it, but I cannot recommend this disk - not that any of you know these guys or that they had an album out.  But now you do.
Posted by Blobby at 6:46 AM

Just listened to some clips. You're right. Not very good. Great pic/painting from "Grey Gardens" on the cover tho.