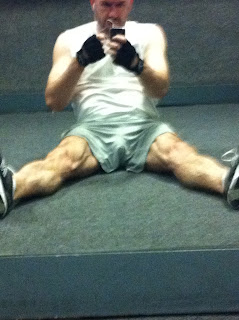 I have been a gym slacker the last month.  I know, right?

Between me being gone at least half the month (in business days on business trips), the July 4th holiday, getting drunk with visiting friends in Columbus and then a week of being sick,  I think I made it to the gym - honest to g-d - maybe four times. Maybe.

This is quite a difference of going a minimum of four times per week, some of those being twice a day - or six workouts per week.

It's a slippery slope, because not only was I not going, I began to not care that I wasn't going (did that come out right?).  And then I actually became very ok with not going.

And last weekend, at a dinner we went to down the street, our friends Marty and Joe asked why they hadn't seen me at the gym.  Even though, in my head, I listed the reasons I did at the beginning of this post, I didn't really find them legit enough to say aloud.   I asked the same of another guest, Keith, why I hadn't seen him for months and months and months.   He just up and quit and was done with it.

I kind of felt vindicated by his reaction and then a little horrified by mine.

Now the crowd at that time is always the same crowd, but it's not a talky bunch.  I see these guys and gals daily but know very few of them and talk to even less.  But I can't tell you how many people did talk to me - well at me:  "where have you been?"   Apparently I was missed.


Mind you, the cute cute cute young doctor was not one of the ones who said that.  But he did do a double take along with his normal nod to me.  He always nods.  It's been a year,  and it's too late now to actually talk and introduce ourselves.  That'd just be weird.

And on the way out,  Andy, my spin instructor, did a double take on his way in.  Apparently in the month I've been "off" he is now a kettle bell instructor too.  ....and an orthodontist.  The man just keeps going deeper and deeper into sadist territory.

You're a terrible tease posting that pic ... that open-crotch shot with a tantalizing view up your amazing, ripped thighs, the outline of your monster package.

When Cubby sees that sexy pic, he's going to be leaking, all hot and bothered... and me as well.

I'm suffering from gym fatigue and really have not been working out the way I want to / should be.

I'm off to see my trainer later today. Hopefully that will help eliminate my gym-apathy.

Congratulations!! Getting there is the first and hardest step!! I applaud you... I have yet to get back into it after my couple of months break

I have been doing personal training 3x/week in a local gym since the beginning of june. this fat chick needs to get her movement on!

I am already noticing a difference in my breathing, and my lower back and knees don't ache as much.

I told my trainer I want to get strong and firm and toned and flexible. but NO muscles!

several bloggers (yourself included) have inspired me to do this!

I haven't seen thighs like that since Tom Platz.