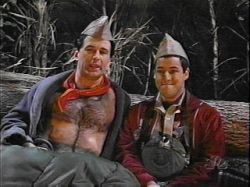 So there is a story of an Oklahoma GOP senator (state, I'm assuming, no congressional) who was busted in a sleazy motel with an underage boy.

First, things like this happen so often, it borders on cliche.

He'll (I didn't get a name and cannot be bothered to even toggle over to Gooooooogle it) confess he strayed from the Lord, he's sinned, he's been forgiven by Jebus and be welcome back to his house and his job with open arms.

It's a Republican story as old as time.

I'm more condemning his choice of man. I haven't seen the kid, but you gotta figure he could do better than that.

So no, none of that part of the story even raised an eyebrow from me.

The (state) senator (and yes, I'm minimizing his importance by saying he's just a state senator, from Oklahoma no less) has broken three laws:  engaging in child prostitution, transporting of a minor for prostitution and the only thing that did raise said eyebrow:

"engaging in prostitution within 1,000 feet of a church"

First off, you can't swing a dead hooker without hitting a church every 1,000 feet in Oklahoma. So by that standard, there should really be a lot more arrests in the area of sex-for-money in the Sooner state.

Admittedly, I haven't read details on this, but the word 'prostitution' comes up a lot - and in each of the charges.

I'm assuming, that the state senator, wasn't the one selling, but the one buying. Which means, the kid was..........selling. Or time sharing. Or leasing his space. Good for him for having an entrepreneurial spirit.

His business model might be off a bit, but assuming he wasn't human trafficked into doing this, he clearly knew what he was doing.  ....and how to make a buck, though it seems doubtful this time that he ever got paid - even up front.

I'll be honest - I think the whole thing wouldn't have hit the lame stream media had it not been for the church angle.

Ralph Shortey, a 35-year-old conservative Republican who has a wife and three young daughters

"shortey" = what the underage kid found out after the douchebag stripped down.

I would like to just drop this here: I love anne marie!

@deedles - thank you! sometimes I can pull a good one outta my fat ass!

drop by my blog and take a look-see!

What burns me most is how these 'sins' will be rationalized away and business as usual for him and his ilk.