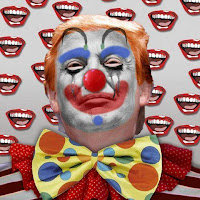 You know, there are days I have nothing to blog about and then days when I can't get it into just one post.

Granted, many a-thing has been keeping me from writing about current political shit - like losing the Oscar thingy, and baking my infamous Prune Surprise Press Cookies™for a certain "someone".  Shhhh. It'll be our secret.

So....let's just start off with the Jews.

Sure, he started off his State of the Union address be denouncing anti-Semitism.

Well, I heard he did - I certainly wasn't clicking on that. I turned on something slightly less caustic: the Real Housewives of Beverly Hills. I decided to catch a group of catty, vicious, silicone-injected women with no personalities, over watching SCROTUS.

In a way, he had to say something pro-Jew, considering earlier in the day the stories leaking that he implied that maybe Jews were ruining their own cemeteries or calling-in threats to their local JCCs to make others look bad.

Then there was the whole blaming anyone else on that Navy Seal's death. Everyone else. I think it is fairly safe to day that SCROTUS doesn't own the placard: the Buck Stops Here.  I applaud the father who refused to meet with him.

Would it have been so fucking hard to say "we lost him", meaning the Seal? No....it was "they". Dump has no culpability.

He's a coward who says we don't win wars anymore.

Nor has he ever read a history book. But that's fake history.

When he was in college, he got a deferment......or five. And if I recall my history, I don't remember Vietnam being all that victorious.

To be fair he did say, "everybody use to say..."  Because he only heard we never lost a war. Once again, he didn't do the work himself. He used audible Cliff Notes. Much like the intel he gets on Sweden from Fox "News".

Now there is the back-pedaling on immigration - and that he's "open" to a legal pathway.

Perhaps someone told him that the Masters candidate in Russian poetry won't ever clean the bathroom at a Carl's Jr - or that if everyone had a college degree, someone would still have to polish the gold on the outside of his residences.

Then of course, the piece of pièce de résistance - for the week, possibly for his presidency:

"I have to tell you, it’s an unbelievably complex subject,” President Donald Trump told a group of governors at the White House yesterday. “Nobody knew that health care could be so complicated.”

What scares me is, not only does he actually believe it, now all those dick-knobs who pulled the lever for him think, "geeze, maybe he's on to something!"

I'll be honest....I don't even know what to do with any of this. It's so far out of the realm of reality it just baffles me.

I will give SCROTUS this:  every time I think he can't top lower himself, he goes one better.

Song by: the Branco Heist
Posted by Blobby at 12:03 AM