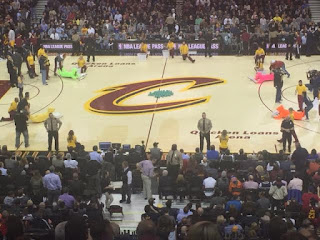 In my never-ending quest to be butch, I somewhat failed again.

The seats were good. The food was fair, as you'd expect at a sporting event. Blobby had no alcohol, as it was a school night.

And actually it was a good game, even though Kevin Love is probably out for the season.  {sigh}.

But the other sick or injured player were back, including LeBron....who had a good game. Not as good as Kyrie......the one who thinks the world is flat.

No. I'm not kidding. And I don't think he was either.

I guess he doesn't know the earth is round........like a basketball.

There were quite a few times I thought we might lose, but in the end we were the champions. Yay us.


If you haven't been to a pro basketball game lately, it's only half about the game. The contests during televised commercial breaks, or the presentations during half-time seem to be what it is all about. Oh, and the "dancing" whores.  I am so sorry - - cheerleaders. I meant cheerleaders.

At one point, during whatever routine they were doing, to whatever song that was playing, 710 turned to me and said: are they dancing to the song we are hearing?

They were and they weren't.  I'm guessing they have three routines - and they rotate them regardless if they're playing a hip hop song or Bon Jovi. Silly 710 - trying to put logic to boots and boobs. Because that's all people were seeing.  I mean, except for the gays.

As for my butch fail, the highlight of my evening might not have been the opportunity to cash in on 10 free chicken McNuggets (if you present a ticket to McDs after the Cavs score 100 points or more, you get deep fried poultry parts.......for no cost!).

No, it was the live version of Hungry Hungry Hippos.  Sorry - only one "hungry' as not to violate registered trademarks.

People supine on carts with buckets with people to push them....and in costume.  40 some balls in the center of the court and a whistle and timer.  Yes, see the title image.

On the upside, I was able to chat intelligently about the game the next day at work. And never once did I mention Hungry Hungry Hippos.

spouse and I stopped going to baseball games in person because it's not fun any more. and a YUGE pain in the ass getting to/from the stadium. and it's expensive.

at home, we don't have to wear pants, we can drink/eat what we want, pet the cats, nap (if the game is boring). I can also knit/fold laundry.

PS - I listened to my first phillies game last weekend on the radio; how do you think cleveburg will do this year? and I read they dropped the racist mascot.

it sounds fun though in a way to attend a basketball game.