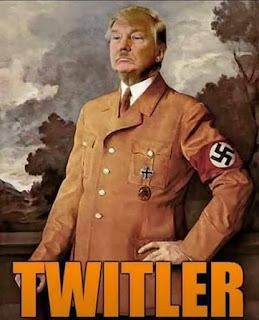 Do not buy into SCROTUS' tweets regarding Obama wiretapping Dump Dower.

It's distraction. He's trying to show us something shiny to have us look away from something. Maybe it's Sessions / Kushner / Flynn and fuck knows who else has been licking Putin's butthole via and envoy or ambassador.

Or maybe it's about something of which we are not yet aware. Because we know....tick tick tick........with this administration, something else is coming.

Mind you, Dipshit Dump has zero proof. But that is his M.O. He doesn't need it. He just takes to the Twatter ...puts a number of exclamation points behind it - and somehow it becomes gospel.

But I believe all it is, is distraction.

And it's working. Every banner on every news show is carrying it. We the people, fall for his shit over and over again. Yet he and his cronies are the ones still prattling on about 'fake news'.....and they don't even get the irony.  Or they're just out and out mocking the U.S. population. This time, I'm going for the latter.

Wasn't SCROTUS just saying complaining last week something about the unwritten guidelines of former presidents not saying anything bad about the current one?

He was speaking of Obama, but wouldn't Shrub be in that category too, who kind of mentioned the racist shit in this White House has got to stop?

But even if Dump thinks that protocol is some kind of standard - he clearly does not believe it to be reciprocal. There is no way that man could ever hold his tongue or an non-verbalized thought. Still, accusing a former president of wiretapping his building?

It should be noted that this is a man who was calling head's of state and lord knows who else on an unsecured Android phone. I have to believe Tim Cook is praising Jebus that SCROTUS isn't an Apple man. It sounds like if any half-decent hacker wanted to get into his data it wouldn't be that difficult. Who needs the NSA to tap the phones?

However, if the stories have been about how much the Dump team has been in touch with Russia - and now it's not a question of if, just how often - will the claims eventually be, Obama knew of this contact and did nothing?

They say the first 100 days are the most important in any presidency. I don't believe that - I mean, yeah, I'll say it, "9/11".  So it wasn't true for Shrub. But if it is - then SCROTUS is squandering away his time.

like obama has NOTHING better to do than to wiretap this little pissant!

I bet the fire in dump tower this week was set by barron playing with matches; that kid ain't right in the head. look at his "parents"!

WHY aren't the media refusing to broadcast this shit and lies?

If you were Melania, wouldn't you want to wiretap the place?

I concur; well said.
This is a tail wagging the dog to divert from his own matters.