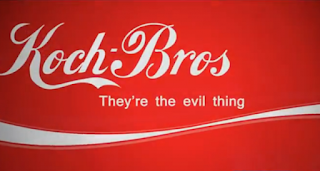 Do you want to know how fucked up this SCROTUS administration is?

It is so fucked-up, that I'm actually rooting for the Koch Brothers!

Never in a kerjillion years (it's an actual timeframe) would I ever consider saying something positive about them: other than, "well, I'm glad they died in that horrific outhouse accident".

Seriously, in what world would one ever imagine the Koch Bros. being not just a voice of reason, but using their significant - if usually misdirected - power to oppose the repeal and GOP's replacement of the ACA??

You keep hearing the 'arm twisting' of Dump on the Hill, outwardly stating that he'll "come after" those who don't vote for his health plan.  Then the "joking; not joking' routine.

The Koch's are doing one better - though it's more carrot than stick: they vow to stand by and help fund the campaigns of GOP members who vote against the bill.

In what world does one side with David.....and ummm.....whatever the other named Koch?

Normally, I'd say "never", but if I did, then I'd have just proven myself a liar. So, I'll say "very very very rarely".

Mind you - there is probably evil afoot with those two in ways that have yet to be revealed, but for one shining moment, two men are taking on SCROTUS & Co. Sadly, right now, they might be the only two who can.

Perhaps they'll buy one (or 47) of those House Reps a backbone.

I don't believe all support the Cheeto Prez, but at this point they know he's unhinged and capable of anything - all of it lies, but as we now know has been eerily effective for him. And they're scared of him - which they should be.

We all should be.

Does someone need to start a GoFundMe page for the Koch's?