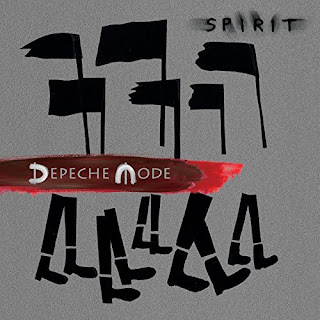 Honestly, back in the mid-80s, if you had suggested that Depeche Mode would still be recording music 30+ years later, I'd have rolled my eyes at you. Or at least behind your back. Yet at least 33 years after purchasing my first DM record, they have just released their 14th disk, Spirit.

I wish I could say that Spirit is a winner, but they can't all be, can they?

Oh, the album has its moments for sure. The opening number "Going Backwards" is stellar.

Allegedly, the album was conceived, written and recorded well before the U.S. 2016 election - but Martin Gore's writing takes in the tenor of the world, if not the United States. ...and "going backwards" I've read reviews where people are wondering "why so much on politics".  I don't mind that, assuming the songs are good. Much of the mid to late '60s music was based on the political climate.  It can be an outlet for change.

The U.K. has it's political issues, but Depeche Mode seems to focus on the U.S.  .....or at least that's my take. And we've made ourselves an easy target.

I like "Poorman" too. It's never a song that is going to hit radio, but it has a hypnotic quality and I like the "heys". It's a little heavy-handed lyrically, but I can get past that.

I can probably do without the drudgery that is "Poison Heart". The remix (if you get the deluxe version) doesn't make the song any better.  Ditto with "Fail".  And while I like "So Much Love", the remix is a total disaster.

"The Worst Crime" isn't the worst, but it feels like it has been done before.

Actually, that is the worst thing about this disk: they HAVE done it all before. There is almost nothing new. Playing the Angel (2005) might have been their last disk that the band had an edge.

Oddly, I feel like they still have potential.  You hear something like "Going Backwards" and think, "I really enjoy them again".....but Spirit doesn't sustain that momentum. It could.....it just doesn't.
Posted by Blobby at 12:46 AM

I've been very hesitant on getting this album, mostly because I felt like Playing the Angel was a train wreck. Granted, I know bands change over time, but sometimes... well... change is bad.