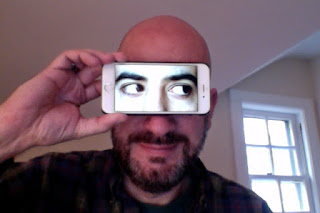 It looks as if Dump will be signing away yours and my rights to internet privacy.  Yayyyyy.

Now, to be fair, I haven't assumed in forever that there is any actual internet privacy. But let's say there was some: Congress had the wherewithal to strip what few curtains there was and revealing all.

Now, you would think the last people who would want web privacy to go bye-bye would be the GOP. You have your Oklahoma senator meeting under aged boys on-line looking to pork them in a Motel 6 less than 1,000 feet from a church!  You know that tryst wasn't set up with two coffee cans and some string.

There's the Mark Sanford trails and tails (and tales) of his Argentinian lover - tracked down via e-lectronic mail.

Then there are all the hookers, politicians wearing diapers.....it goes on and on. Oh, and Dump getting pissed on by Russian hookers. Because that came via the web too.

Yes. the Dems have their issues too, but they had the sense to vote against this.

If someone wants to read my browser history, have at it. You're going to find a lot more Peter Griffin clips than Colby Keller ones. But for full disclosure, you will find some of those.

I scrolled (and scrolled) down CNN (online), NYT and other sources to find who is truly covering this repeal of privacy. Only found something on Washington Post - - and that was way way way down the screen.....below the electronic fold, if you will. In the Cleveland paper, a small article appeared......on page 6.

Again with the distractions of Ivanka getting a government job - - one for which she's not qualified and probably couldn't pass the civil service test to get had she been someone off the street. But while we talk about that - and the papers write about that - while the administration passes shit like this and coal production / fewer environmental concerns as you're looking at that whore daughter (no....not you Tiffany. It's never about you. Ever.).

I don't think it's coincidence that SCROTUS just switched from Android to an iPhone either. Though Tim Cook is probably going "fuuuuuuuuuuuuucccckkkk no!"

Remember how hard it was to hack after those San Bernadino killings a while back? Dump was allllllllllll about Cook and Apple taking the helm to do that hacking too - to which they refused. So, now that privacy is harder to achieve, SCROTUS wants to take less risk.   Oh, the irony.

My lord, I hate that man.

"they're watching you, they see your every move" HOMEBOYS YO!

russia and china are probably watching us also.

I'm sure there will be a massive uptick in home VPN server sales soon...