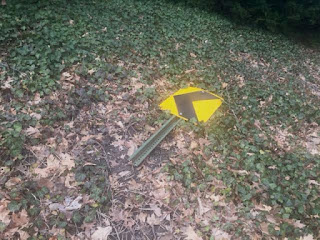 You know how the other day I was talking about 'the new normal' when it comes to politics? And how we shouldn't just accept the behviour and its aftermath as the way it is.

While this isn't about politics, I nonetheless recognize the irony in trying not to be so blasé about things necessarily shouldn't.

A lazy Saturday afternoon. There is no sleeping in on Saturday morning when it comes to Shep. While I love him being on a routine during the work week, he isn't one to grasp the concept of a weekend. So out of bed at 05:15 (or so) it is for me for our morning constitutional.

So by the time the daily activities started winding down, I started dozing off, whilst sitting up. I finally just called it and went horizontal. That lasted all of three minutes before Shep jumped up. As I finally finally closed my eyes, he took off barking. Howling even.

I jumped up, threw on my shoes and headed out while 710 called the police. Oddly, they kept putting him on hold to take 9-1-1 calls. Those are separate lines than just calling the police station, no?

As it turns out, when they came back to him, they thanked him but said there had been several 9-1-1 calls already for this accident. Did I mention, depending on the time of day we live on a busy road?

I trekked across the lawn as another neighbor approached from a different direction. She lives a street away and heard the crash. 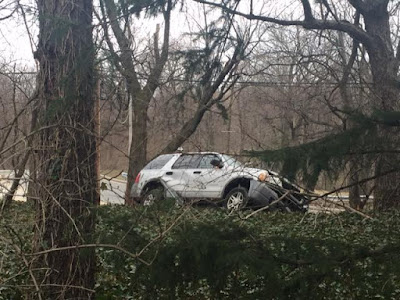 It looked bad. The worst one yet - - and that's saying something. I heard no moans, I expected to find the worst when I looked into the car.

Two deployed airbags, some personal affects......but not bodies. No people. No pieces-parts of people. Perhaps it was the Rapture.  More likely it was a stolen vehicle.

I was shocked for all of .0028 seconds that the occupants were gone. Fled, as it were.

I guess this is what I'm fighting against - in theory. That this type of behaviour is normal now. That people steal (allegedly), crash things, and run away.  And it's normal that I shrug my shoulders and just go, "that's the way it is!".

The folks really did a doozie on this vehicle. It took out two directional signs - the one you see in the title image and this one...... 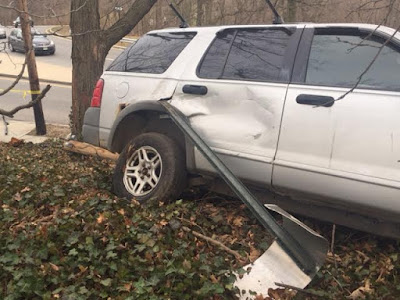 Yes, coming close to puncturing the gas tank and also starting to wrap around their rear wheel. I said to 710 about the dent: "they're never going to be able to buff that out...."

When you went around to the other side, you saw this. 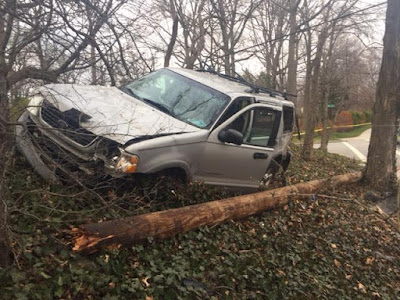 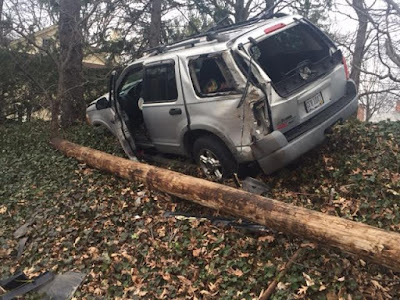 Usually they somehow miss the trees and telephone pole. Not this time. And this time that telephone pole had a streetlight that came down in pieces in our yard, on the sidewalk and in the street. The street portion got caught under a passer-byes car, to the point they couldn't go forward or reverse off it.

Paramedic's and fire arrived in under five minutes. None of them seemed that surprised at the scene or the lack of victims (though tons of people driving by stopped to see if "we" were ok - and a number just stopped to take pictures).  The cops showed 10 minutes later - or longer.  While they took a little info, they really just directed traffic.

Things got blocked off due to the sagging and downed power lines. We went inside - as there was nothing to see (not a cute cop, firefighter or paramedic to be had!  Where are my tax dollars going??).

Hours later the wrecker came by - complete with flood lights - to rip the SUV from hillside, of course, leaving a big gouge, and taking even more ground cover. Naturally, they ended up leaving about 60 lbs of junk - bumpers, glass, headlights, car parts and worst of all, a Nelly CD.

710 and I spent part of Sunday cleaning all that crap up.

Once again, we contemplated what we could do to take us out of harm's way. The city won't do a thing until someone is injured or killed, this we know.

In a weird way, it keeps us entertained. It's now pitch black out there, as not only is our streetlight off (read: gone), but so are all the connecting ones. If someone doesn't have another accident before those are fixed, it will be a miracle.

Song by: Orchestral Maneuvers in the Dark
Posted by Blobby at 12:07 AM

and you pay taxes for this bullshit "service"!

Odds are the SUV is either stolen, or uninsured, or both.

Someone, thieves or whomever, seems lucky to have escaped.

Wow.
I like the rapture theory. Were there any shoes?

Amazing. That triangle of concrete at that intersection has all sorts of big yellow signs on it and everything.

Y'all really should consider installing a DVR out there to record these things. Then upload them to YouTube and notify the local media each time. Enough of those and the city might take a hint.