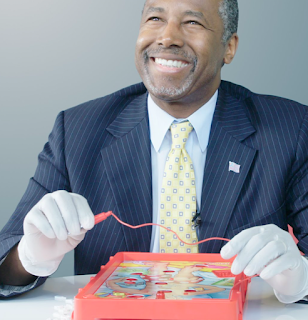 
Is there a dick bigger than Ben Carson?

The answer, of course, is rhetorical. But to be on the safe side, the answer is "no".

I'd say - almost - that I could see this coming from any white man (or Kelleyanne) in this administration.  I'm sure they thought 40 acres and a mule was government overreach. And I should not be so stupid to believe that an educated (you don't get through med school on charm) man, let alone a black one, would / could ever think something like the above, let alone say it........aloud.....in public.......to his own employees.

How does the story of slaves (or "immigrants") even factor into HUD and it's every day operations? And can you say "immigrant" in this administration without it followed by, "deport"?

The Department of Housing and Urban Development was stunned by the uproar and spent part of the afternoon responding to the news media on Twitter.

The hired spokesman spent the afternoon responding and was stunned. Well, actually, the rest of HUD was stunned too.......but not at the uproar, but by their new boss.

I know I've said this before and I will again and again...........but how can this administration get any worse?  Or dumber?

I would like to scream at carson: "yeah did your ancestors enjoy being dragged from africa in chains to be forced to work on the plantations and be treated inhumanely? I didn't think so."

He is a Fuck of epic proportions, and just proves that brain surgeons can be dumb as fuck.
Every time I hear him speak, or see of hear that quote, I'm all, "What the fuckity fuck fuckness is that fuckwad saying."

Carlos won't let me see TV for the rest of the day.

I look at this "man" and wonder how in the world a person can become a brain surgeon without having one of his own.

I fear you are going to get your closing question answered in awesome terrible ways.