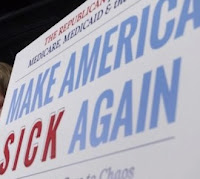 I'd laugh at the epic fail of SCROTUSCare™, but you know - I'm kind of waiting for that other shoe to drop.

See, Dump can still blame the democrats for their lack of support (and he is). If the healthcare bill went up for a vote, he'd have to look to his own party......because the count would be right there for all to see. Since the GOP has the majority and they still couldn't pass the bill, well.............it ain't all the democrats.

And yes, of course the democrats didn't go with Dump on this one. What the fuck is he thinking?

Also, if they actually voted on this: it would be actually be a SCROTUSFailure™.  In pulling the vote, Dump can "claim" he didn't lose. It's all in the details, isn't it?  And that claim he knows the art of the deal, clearly has misrepresented himself.

I have two concerns from this entire event - neither of them minor.

First is SCROTUS himself. His actual ballsy move to say, "I never said I would replace and repeal OmambaCare quickly".

Part of me thinks he does not.

My problem (well, to a degree) isn't that he said it. It's that I think he actually believes what he's saying. That whole thing of, "if you say a lie enough times, it becomes the truth".  I believe his "followers" believe it too. I believe all these outrages, all these jaw-dropping moments, are the new normal.

My other problem, of course, is the media. Play the clips (multiple!) where he said he would repeal and replace and call him on it.  Say he is "lying".  Not "mistaken.  Not "an inaccuracy".  Even Pinocchio would be slapping his own forehead in disbelief at this guy.

You know how 'experts' used to say that violent video games have desensitized kids?  These kids are now Dump voters. They're Clinton voters too.  And the problem is if they just go "eh" on his claims time and again, we are all totally fucked.

The second issue is that Tim Price remains in charge at HHS. He has power. He is the biggest detractor to the ACA.  He still can make limits, make it difficult for folks - and he doesn't need Congress to do approve any of it. They gave him that power when the Senate confirmed him as Secretary.

Still, I like this chink in this administrations foundation. Even David Gergen - who has served five presidents (only one a democrat) - speculates this is the worst first 100 Days of any administration. And that includes James Polk's and Millard Fillmore's ..........and most people don't even know they were presidents!

I keep hearing 'rurmours' that Dump will resign "in the near future".  It's a nice thought - if improbable. And even if it were true, that means Pence would be in the Oval Office.  So....if you think we're fucked now......just wait.

Could this have been the bigger plan B, post-nomination?

Song by: Depeche Mode
Posted by Blobby at 12:09 AM

Perhaps "he" thinks the voters are stupid, a bunch of them voted for him - giving some credence to that thought.

Wait a couple of days and he'll be telling his Trumplodite hoards that it passed, and that's why he moved on.