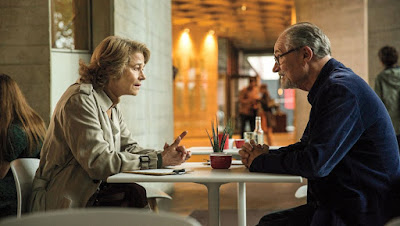 Looking at it now, I should have stuck with a more reasonable number when it came to our 2017 goal. A lesser man might rejigger the numbers and change the goal. I am not that man.

If I fail, I fail - and considering we are only at our third movie of the year, and first in over two months, I'm not horribly optimistic. It hasn't helped that it's been a seemingly weak movie selection time too.

Yesterday we saw the Sense of an Ending.

Whilst you know, I rarely read reviews before seeing a movie, but usually I've heard of the movie or seen a preview. Nada with this one. I just saw Charlotte Rampling, Jim Broadbent and Michelle Dockery Lady Mary, and figured, "eh, how bad can it be?"

It was a book, one I didn't read, so I cannot comment on how it compares, or if it does.

Short review: it's good, not great.

The story technically takes place over a few week period of time, but on another level over a few decades. The director does a good job at playing with time - be it introductory scenes that get played back, only to fill in gaps. Or a brief shot here or there that then gets explained much later in terms of story. Or even a conversation that happened in a class that takes the form of reality later on.

It's really that one conversation that much more subtly spills into later life that, for me, drove the film. I won't say it was adequately addressed, but I won't rule out that I was off base on what the direction truly was.

Broadbent, as always, does a great job. I like Rampling too, though like she was in London Spy - she is cold and has little emotion. Oddly enough not only was Broadbent in London Spy, but so was Edward Holcroft - who played Rampling's character's son.  It seems like there are 37 actors in Britain and they all just cross over into everything.

I'm sure it is the theater we chose and the times of day we go to the movies, but honestly, we were at least 15 years younger than anyone else.

The Sense of an Ending, as I said, is ok. I wouldn't suggest the need to run out and see it in the theater.

Unlike you I do read reviews before seeing film. I sometimes wish I didn't but the temptation I find too hard to resist.
Had never heard of this one - and it turns out to be no surprise since it doesn't get a release here until Apr 14th. For some strange and unaccountable reason many British films get a late entry on worldwide staggered release dates. They surely can't be 'testing the waters' before venturing on releasing what is, after all, a BBC film? Very odd.
However, notwithstanding your low level of enthusiasm, it sounds like the kind of film I would be seeing anyway, though by the time I post my verdict it could well have dropped from your memory.