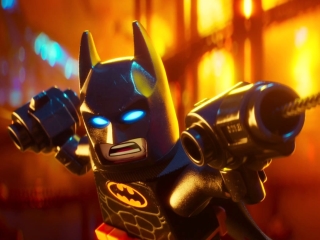 It was a movie two-fer this last weekend.

We eventually got around to go seeing the LEGO Batman Movie.

To be fair, the first time I saw the LEGO Movie, I didn't think much of it. But with repeated (and repeated and repeated) showings on HBO, I found the movie had some charm and it had a story - - even if you have to endure real-life Will Farrell.


The probable highlight in that movie was Will Arnett as Batman.

So when they announced he'd helm the follow-up, it all sounded so promising.

Can I just say, for the first time since I was a toddler at a drive-in, I fucking fell asleep at the movies.

Yes, there are LEGOs, but it could have been anything. Unlike the LEGO Movie, until the end, and for only the briefest period of time, do they do anything LEGO driven.....not that it all has to be about the toy......except for the name and the brand.

The story itself was weak and not nearly as clever as the last. And in what universe do you have Ralph Fiennes as the voice of Alfred, and have Voldemort as a character in the movie, yet have it voiced by Eddie Izzard?  Hell - even Laura Kightlinger had multiple character voices.   Oh - and you had Voldemort right there!!!

And is it a little sad that Siri had a bigger role than most everyone but Batman?

Sure the movie had a few funny moments - almost all (if not all) were Arnett's. But I expected way more.

If the folks on Facebook are to be believed, this was a great movie. It's not.

I guess I can reassess after it hits HBO in eight months and when I've seen it 19 more times.

I've been aware of the superlatives directed at this and very nearly went despite it being way beyond my 'usual' kind of film. Your reaction reassures me that perhaps it didn't really qualify to be in the 'great' category which many are putting it into. Must confess that I'm still strangely curious and intrigued, though.