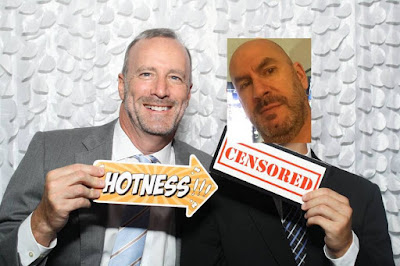 That is how many categories Mike and I differed on.  Usually it is like 4-6, leaving the margin of error to be very small for a win or loss.

(...and for the record, Blobby did not "open a door" to being called ugly. I was baited and trapped. And yes, the 'ugly' comment might have been taken slightly out of context, but it was a fine fine line.)

I did miss Mike not being home for the broadcast. Well, he did eventually make it home, but he was pulled a few different ways....with Otis and luggage and all.

The last few award shows - whichever they've been - we've live-chatted during. It's made for great fun {of course, I'm only speaking for myself}.  Personally, since he was out in Southern California, I'm not sure why he just didn't pull a few of this strings and get an invite to the shindig.

I guess he's waiting to use that card to get something really really nice..........like a sit down with legendary Oscar winner: Adrian Brody.

Now, Warren Beatty and Faye Dunaway might say I had won, but the makers of La La Land thought the same thing, so.......

One never knows where this could go...or how it could turn out.  .....though I think we all know the reality of it......I'm La La Land in this situation.

It seems that seeing 24 movies in a year doesn't pay off in these situations. Do you wanna know how many Mike has seen this year?  Do ya?  Do ya???

One fucking movie.  ....and I don't mean pornography. But I don't don't mean that either. Because I just don't know. I was using the word as an adjective, not a verb.

Truth be told, as much as I wanted to stick with the show, especially since Mike finally caught up on Tivo (isn't it cute he still has Tivo......and actually records award shows?). We could have had a funny exchange......except for the fact that it was after 22:30 and they were only at the 11th award, out of 24.

Mike might have given up on beauty sleep a long time ago, but I still at least try to make the valiant effort.

So I had to get up yesterday a.m. and make my way through the other 13 awards via the news. And since it's all "fake news" who even knows if those are the correct winners they published.

A few years ago, Mike "joked" that it would all come down to the 'adapted screen play' and sure enough it kind of did.  That is where he clinched it.

The breakdown goes (and I have to publish it, so Mike does not think I'm cheating):

BEST PICTURE - we both lost

BEST DIRECTOR - we both won

BEST ACTRESS - we both won

BEST SUPPORTING ACTOR - we both won

BEST SUPPORTING ACTRESS - we both won

BEST ORIGINAL SCREENPLAY - we both won

BEST CINEMATOGRAPHY - we both won

BEST FILM EDITING - we both lost

BEST COSTUME DESIGN -  we both lose

BEST ORIGINAL SCORE - we both won

BEST ORIGINAL SONG - we both won

BEST SOUND MIXING - We both lose

BEST DOCUMENTARY FEATURE - we both won


4-3.  It's like a crappy hockey score. Or possibly any Cleveland Browns game.

Now I am on the hook for some kind of treat to send his way.  Maybe a gift card to Krispy Kreme? No - he probably already has a lifetime rewards membership card there - right?

Of course, I could just get treats for Otis. That way I'd fulfill my obligation of a baked treat sent to his address.......and it helps Mike keep that tankini bod.

Whatever I send, I'm 100% sure he'll be gracious about the entire thing.  (where's that eyeroll emoji when you need it?)

We all know that a lot of the votes that films get have not been seen by those who cast them. So your own thoughts are not so very different from the way it actually happens.

My favorite Tweet regarding the Best Picture snafu: "In true form, La La Land only won Best Picture in a fantasy moment shared between two former lovers imagining wistfully what might have been."

Well first, I’d like to thank the Academy, my agents, my managers, and Sweet Baby Jesus from whom all award show greatness comes.

Secondly, I’d like to thank Blobby for doing all of the heavy lifting with this contest, despite secretly knowing what was sure to happen.

Thirdly — have I mentioned all of the “little people” who made this possible? Oh yeah, see last paragraph.

But seriously folks: it was an awards show to end all awards shows. And while I did forfeit my beauty sleep on Sunday night to watch the festivities, one does just not miss the Oscars, does one?

Credit to Blobby for his lovely wrap-up of the category wins and losses (more losses for him, but I digress). Since I don’t “do math” myself, I counted on him to be accurate and honest. And I’ve never known him to be inaccurate or dishonest, so he’s got that going for him.

But seriously folks — and I am being serious now - it’s a delight to win again. Despite some wrong choices (and a lesson to myself to go with my gut - not that I have a “gut’), it was a fun race. And to Blobby’s point, it’s a lot more fun when he and I have the opportunity to do a live chat during the race. He’s quite a wit and a bon vivant.

No pressure on the prize, Blobby. What comes my way comes my way and will be graciously accepted. Just none of your “Prune Surprise Press Cookies” again.

Fun playing Oscars with you, Blobby!

Oh and I love the photo selection! Nice handiwork...