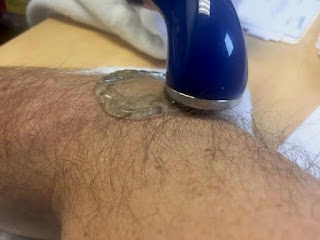 So I learned something new yesterday on the rationale for the goo that is used during ultrasounds.

Apparently, the waves just bounce off the skin if there isn't that gel. The gel helps the waves go to there they are going.

Still, it's slimy and a little icky.

I know this because I went to my first physical occupational therapy session yesterday.  They scheduled me for OT when the order really said PT.  I think it's the same person, actually, but the order needs to be physically changed or technically it's insurance fraud.

We went through some heat therapy. We did the exercises. I was told to put the band back on - even though the doctor said to take it off. And she (yes, a she - not a cute guy), did a tissue massage. What she was looking for were pressure / pain points. She found many.

The heat wrap actually started to burn part of my arm. She had to rewrap it. The ultrasound thing was weird the last two minutes of the eight minute treatment - it started to feel like little pin pricks - though every so slightly.

I know part of it is to stimulate blood flow, but I really don't know what it's supposed to do in the long run.

I did find out I allegedly have a bone spur right at the area of my affected elbow.

Oh yes, I say "allegedly" as she didn't feel it, as much as read it from an ultrasound (a radiological ultrasound, not a treatment one) report. The only problem is, I haven't had an ultrasound. She countered, that I had one on the 10th. I did have a doctor's appointment then, but no test other than regular x-rays.

So I guess I have to scour my bill when it comes to make sure I don't pay for that exam. But then there's a bigger issue:  who has the bone spur who doesn't know it?

I will do a few more weeks of PT/OT and reassess then.

Hopefully it will get better.

The only time I had to under physical therapy was when I developed a bone spur in my shoulder. It was lots of hand pedaling, pushes off the wall, specialized movements, weights and then a tens unit followed by heat and cold treatment. The tens unit was not pleasurable. It felt like ants inside of me.

Certainly a cause for concern with your health care providers. Check into it. But above all else hope the therapy does help and you are on the road to recovery.