the Attack of the Giant Ants

So, I took to Facebook - kind of - two days ago after seeing this. 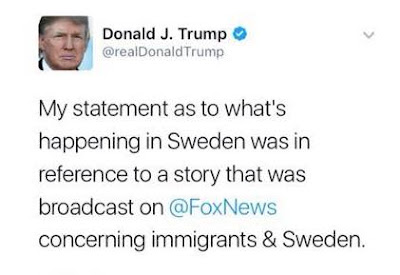 I say "kind of" because I didn't post it myself. I commented on a 'friend' who posted it.

First - I'll start off by commenting on John Roberts (?), who basically asked SCROTUS if it is fake news if they quote him on things he makes up....basically, his total misinformation about the Electoral College numbers he got.

They are not the biggest of Republicans or Democrats. Both Bushes, and both Obama elections were larger in electoral votes. SCROTUS' response was priceless.....and frightening.

I don't know, but I'm going to stand up in front of the press corp and quote it as fact. He'll just repeat anything someone tells him?

Is he the Ron Burgundy of presidents?

With the Sweden "terrorist attack" - the trend continues.

The man has multiple national security agencies working for him - and he gets his intel from Fox "news"?   ....which btw.......I don't hear SCROTUS calling them 'fake news' when clearly they totally reported a fake story that DJT repeated.

But oddly enough, in my FB comment, I didn't rant or rail.

So far no one has taken the bait to respond.

I get that some news organizations lean one way or the other in terms of how they deliver the news - Fox included. But the out and out misrepresentation of a non-existent event just wows me. And that the president of the fucking united states takes it as gospel because he saw it on tv is terrifying to me.

I know there are a few SCROTUS-loving folks who claim not to read my blog, but do. And if you can comply with the aforementioned "rules" of engagement, I'd love to hear your take. Maybe you side with how he gets his information, or maybe your don't  - either way, speak up.


On a side note: I do find it odd that SCROTUS doesn't use the SCROTUS twitter account, only his personal one.  Is it ego? Is it that he can't say things on a government account that he can on his own? Does he not truly think of himself as commander in chief?

the dump is a steaming pile of shit.

Unfortunately I believe that many are satisfied with those non-answer answers. They are satisfied simply because of ...white, male and that (R) behind the name. I hate to say it's "sad", but it is.

You are a brave man to post such.
I am told always to ask for reason, logic - and most important - data when dialoguing with Trumpsters