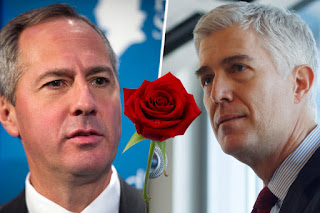 Any more these days, I come home to see what fresh hell awaits.

Well, now plagiarist DeVos got her cabinet seat approved. You had to see that coming. She never went to public school so she doesn't know it's not good to copy of your neighbor.

But Dump, can't get away from him television showmanship - if that is what one chooses to call it. I call it P.T. Barnum with a cathode ray tube.

First - a televised announcement (in prime time) for your pick for the Supreme Court?

Second - you're bringing your two top pics and selecting one?

Doesn't he have to go horseback riding on a beach with each of them, have a picnic lunch and make conversations with lots of sexual innuendo before giving the rose to just one of them?

I'm basing all my knowledge of the Bachelor from the Soup or the People's Couch.

I know I should care about both (or either) of these guys, but I don't. Oh my - a middle-aged white male. Shocking!

The thing is, unless they killed a baby on national tv, the vote will go down party lines. And even that baby killing thing is not a deal-breaker for the GOP faction. In fact, it might bolster their vote....but only if the baby was a refugee.....because you know: pro-life.

The public can protest all they want over a nominee, but does it ever do any good?  And don't say "Bork", because I'll counter with "Thomas".

So far the Dems have not stopped a single cabinet nominee. Sure the votes are off by one, but you only have to win by one. I expect Sessions, Price and that Secretary of State guy to make i through as well.

The best the Dems can do - and I encourage them to, regardless of the pic of how qualified they are - is to hold up the nomination for a year or two. Give the GOP a taste of their own medicine.

They need balls. I'd say bigger ones, but they should at least try out a starter-set before they go into 'man-up' mode.

I don't know about in your neck of the woods, but here in the land of Cleves, they are running political ads.  I shit you not.

Song by: Robert Plant & Alison Krauss
Posted by Blobby at 12:02 AM

I could use a People's Couch marathon right now. Except that I'd spend my time wondering who supports the Cheeto.

They have run a Jeff Sessions ad in NJ