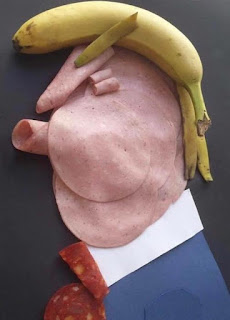 The descriptor, not the man. He was never mine to let go of. I can't / won't embrace him.....unless it's to break his neck of suffocate him.  Yes Secret Service - I'm sure you can find where I live.

And as much as I like CheetoFührer it's not quite working for me.

So, while I'd like to claim this as my own concoction, Becky led me to So-Called Ruler of the United States.

Yes, from now on, the Donald will be known as SCROTUS.

And while I'm not completely burying my head in the sand - it's hard to take the news. Maybe I'm imagining it (though I don't think I am), but there is a LOT of SCROTUS coverage. I know he's new - and a dick - but I don't think Obama or even Shrub got this much coverage.....combined.

Yay to the 9th Circuit Court.  Of course, this poses problems for SCOTUS (sans R). No, scratch that, SCOTUS poses the problem. The delay of getting the case on the docket could mean having a 9th judge. A SCROTUS pick. A SCROTUS prick.


Not that I'm thrilled with the 'ban' ("it's not a ban!"), but the anger and hate coming from this White House is just as scary as the lies.....and the propaganda / whitewashing of the truth. Any truth.

They are literally - literally !!! - telling a lie until it becomes the truth.....and not only that, are saying it out loud.  The 'we will call it 'fake news' until you support the president'.

I'm surprised not a bit by the confirmations of Sessions and DeVos. But you gotta figure, especially with the latter, you can't feel good about your appointment when you need a tie-breaker.

...and speaking of SCOTUS (sans R), I don't believe for a second that Gorsuch’s comments on Trump's judge comment ("demoralizing") weren't fully orchestrated to bring the left to his side.....even by 2-3 votes.  To me it's just an obvious play that I never considered he wouldn't take the opportunity to say something "off the cuff" in front of democrats who would relay it to the media.

The dems played right into their hands, of course. They always do.

Ok....ok.  I do NOT own or know of this song. I do have another song I do own with 'dump' in the title, but this one presented itself and it was far far far far too good not to use it.  ....but mostly for the band name.
Posted by Blobby at 12:04 AM

bwhahahaha on the band name!

I vary between Hair Furor and BLOTUS ... Biggest liar of the United States.
But SCROTUS is good, too!

"A SCROTUS prick", ha! I like the way your mind works!

"Twitler" at our house.

O3 (the Orangutan in the Oval Office)