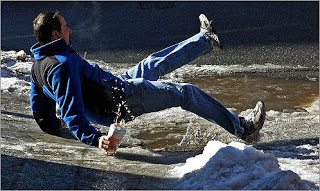 All our snow was melted, so I cannot blame that.

Yesterday morning I had a meeting off sight, so I didn't go in to the office, but planned to go directly to said meeting.

While we had done our daily 05:30 constitutional, I took him out for another chance to go #1.

When one crates Shep, they should be fully prepared to walk out the door. Coat on. Shoes on. Keys in hand. The whole ball of wax. If you do it properly, you can almost be at the door before the barking and howling beings.

So, taking him out before crating him throws a wrench into the plan. Either track through the house with wet, possibly muddy, shoes (snow melted and it poured the day before, leaving everything yucky) or take off shoes, crate and then have to put shoes back on. That is a lose-lose.

I attempted something else. I put on a pair of 710's slip-on shoes he keeps for taking out the dog. That was problem #1.  #2 was taking Shep out for more than a trip to the ground cover. He pulled me for a walk - I had the time.

Our neighborhood is old. I'd say about 50% of the sidewalks are original.......and slate. Slate is a lot more slickery than ceee-ment.

So, not knowing the shoes had less than optimal tread, Blobby went down........and he went down hard.  And while this is a semi-gay blog, I didn't "go down" that way.  Just to be clear.

There were a few problems, of course - besides me laying in sidewalk dirt and wet whilst in my work clothes.  I had landed on my bad leg. The one with the plate and nine screws. So there was that. I also hit my right elbow....which is another problem.

But my bigger issue was my fall and probable noise(s) I made scared one puppy.....and I also inadvertently let go of the leash.

710 and I had this conversation weeks back....that if he got away during a walk, what would happen? I figured out early on what Petey's reaction would be:  he looked back once and kept trotting away. The ingrate.

Shep is a special kind of dog. He looked back when he wasn't so startled by all the action, I called him, and he came running to me......as I lay on the cold, wet, hard ground.

It allowed me to grab his leash, while I tried to figure out to get myself up with a little dignity - though that had already disappeared.

So most of yesterday, I walked with a limp. But I can't say it's from the fall. Two days ago it was 57 degrees.....if February. Yesterday afternoon it was snowing. My leg is susceptible to low pressure fronts in terms of pain and limping. So......it was the fall or the winter.....or both.

Song by: Shawn Colvin
Posted by Blobby at 12:08 AM

Ouch, falling really sucks (and I don't mean in the way many would enjoy!) I am glad to hear that 1: you were able to get up and no report of anything broken and 2: that the good dog knows who is good to him and comes back when called and needed. Do take care!

please be gentle with yourself; hell, I have fallen inside my own home!

Training pays off! Sorry about your boo boos.