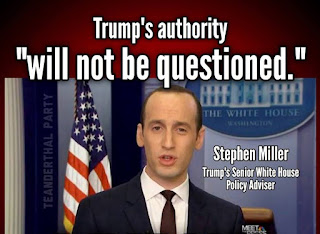 Yeah - it's great and all that that douchebag met his fate 23 days into the job. But do any of us think anything is going to happen to him?  Do any of us think that this will put a chink into SCTOTUS' armour?

I'm more surprised Flynn "resigned". I thought SCROTUS would go to the mat for any of his picks.....no matter how ludicrous the person or situation. I just assumed he'd fight to the death for the wrong thing.  Colour me surprised.

My current issue is with Stephen (and you know he probably pronounces its 'stef-in') Miller.

For all the naysayers of SCROTUS not being Hitler-ish, you just need Miller's quote from last Sunday's Meet the Press to show you it's not so 'ish'

I'm not quick to forget that others in the administration - regarding his 'not a ban' ban - that the courts should listen to the one person that matters - the president. Clearly their 6th grade civics class with its lesson on separation of powers didn't take. Or maybe they were sick that day.

Of course, I think they're just ignoring that whole Judicial, Executive and Legislative thing on purpose to see how far they can go. And because they are evil evil monsters. And they don't think anyone will stop them - and scarily, very few people are.

Maybe between things like that last Meet the Press and perhaps Flynn being investigated will shed new light for the Dump supporters on what kind of man they might have really elected.

Song by: Soundgarden
Posted by Blobby at 12:03 AM

QUESTION AUTHORITY - a good protest quote from the 60s is getting a new life today. RESIST! NO ONE is above the law!

I bought myself a little subscription to The Washington Post yesterday. Good journalism that took down our last criminal of this magnitude needs our support.