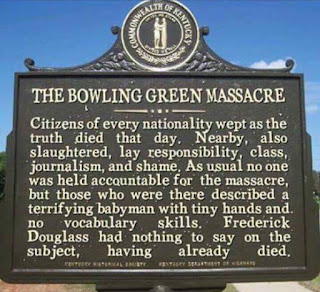 I tried to warn others a few months ago about Dump flashing shiny objects to distract you / us / me from the important things in life.

...and if not important, at least the ones that are his failures. Sometimes they are both wrapped up into one.

I hate to say it - but this administration is great at diversion and distraction. They know America's short attention span and how easily we can be derailed by something so heinous as Kellyanne's face.....the words that come out of it.

So, while many many many many folks mocked, tweeted, meme'd and Facebook'd all of this shit on the Bowling Green Massacre (and of course, not delving into it - since I was working - I assumed it was Bowling Green, OH),the CheetoFührer & Co, went about their "work".

So while people were what I believe to be purposefully diverted, the new administration went about to kill a rule aimed at protecting streams from the effects of coal mining.

Yes, Flint, Charleston WV weren't enough to ruin their water supply for months, years or decades. Now anyone in or near coal mining areas get a chance to have their water tainted. And let's not forget any of the Keystone or Dakota pipeline folks.

And let see, I think this is a nice juxtaposition

No - not the Fish Furniture ad. Who would buy a sofa set from a place named like that?

I'm talking about the started attempts to repeal regulations against the banking industry. The same banks that decimated us in 2008.

There was also that diversion of Dump's first botched military outing. But they did a double diversion with that one - the 10 year old video the Pentagon put out of the 'raid'.   Lies. All lies.

Of course, they could be trying to take your mind off of Dump's Supreme Court nominee..... 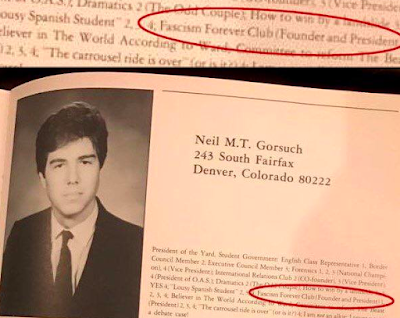 The nominee nor the administration even tries to hide how far to the right Gorsuch might be: the Fascism Forever Club.  He's not just a member - he's the Founder and President.


Yes, we can mock - and should - this administration for just about anything. But when they release / say something so outlandish, you had really better take a look at what they're trying to slide past us and don't let them and don't let up on the vigilance.


.....oh, and he lied - again - and didn't really distance himself from his companies. The sad thing is, he untruths so much, I'm not even the least big surprised. That in itself is trouble, as the U.S. people just get used to the fact as normal.

Song by: Dire Straits
Posted by Blobby at 12:05 AM

but but but his rich friends can't borrow money, so he HAS to undo dodd-frank just for them!

he is totally mind/body/spirit fucking we the people. but not if we keep up the pressure!