I think you all know I'm down on Dump.

Save one anonymous reader (who swears he/she is never coming back....but then does), I dare say the rest of you are in my camp on this.

As we've seen in interview after interview and debate after debate with him, it's the art of not saying anything and distraction that got him where he is. He has little to no plans for anything, but that didn't stop him from getting elected.

And now alllllllll anyone can talk about is that fucking play, Hamilton.

Tons of memes with Abraham Lincoln bemoaning Pence's horrible encounter in a theater. But it was Dump himself who silently made the biggest wave.

No.  No.  Not that he was silent about Hamilton.  He was quite vocal about it. Too vocal, in fact. 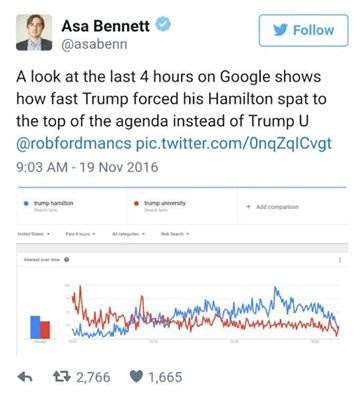 And that is why.

He very effectively shut down any discussion on his $25MM payout for fraud - while admitting no guilt. Yes, because 'innocent' people always part with $25MM.

Still, any asshole with a keyboard, a Facebook or Twitter account and the ability to upload a hi-larious picture of Pence at a B'way play took part in the quelling of a president-elect involved in a high-priced law suit.

And he got away with it.   Easily.

If people actually noticed this - which most did not - they should be fucking frightened more than they already are. But they were too busy coming up with Pence Plays on Broadway titles.

Dump has already gotten away with making calls to sitting heads of state on non-secured phone lines with Qusay and Uday at his side . Ivanka is sitting in with diplomatic meetings and potential cabinet members. I doubt they all want to purchase her $10,000 bracelets. Dump's DHS potential nominee walked out of a meeting in Dump Dower with policy paperwork in hand - for anyone with a telephoto lens to see.  ....and they did...and embiggned it.

Dump is testing the waters, and getting in quite deep, on any (and many) conflict of interests matters.

And no one is pushing back.


He doesn't even have to rewrite laws to get his own way. I have yet to see anyone - or anyone of influence - protest a thing.

Admittedly, I'm not fan of Hillary Clinton, but she was raked over the coals for less. But that is what misogyny looks like, I guess.

I don't either. the orange shitstain is a danger to our country. and no one cares.

Dude, you're really harshing my buzz. Tomorrow (Thanksgiving) better be more uplifting 'cause I don't know if I can wait until Saturday's Shep Love. :)

And what about that child rape charge????!