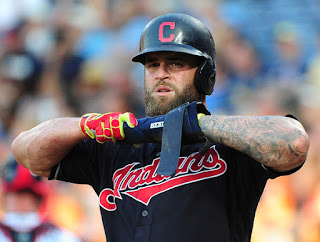 I actually started to draft two entries - and just update and publish as needed since it would be late late at night before I could do so.

Then I opted just to combine them and do some editing as we went along. I'm going to be all over the place - so bear with me. I'll use strikethroughs for what I've drafted, and ended up having to retract.

I even have two titles, depending on a win or loss.

It has been in the 70s for the last two Series games.

That would be called an Indian Summer. Alas, it was not meant to be.

Apparently it has to be a cold day in Hell before the Indians have a championship title.

We lost so badly in Game 6, I finally came to the conclusion that on some level, the game is rigged. No. Really. It's no longer just a conspiracy theory.

Think about it:  you have two teams who haven't had a championship season since before the Korean War. Why not milk it for seven games? It's lucrative for MLB - and I'm sure both teams benefit financially.

While I don't think anyone could have planned the grand slam that sunk that game for the Indians, the way Cleveland fielded was worse than most middle school travel baseball teams. It was honestly like they were trying to throw the game.  I felt good turning it off at the top of the 5th, knowing we were going to Game 7 and I could save my angst for that.

And angst I had.  Have. The game is still going on as I draft this. (well, now it's a rain delay at the bottom of the 9th - and went into extra innings, because I'm getting oh so much sleep as it is this week!!!!.)

Game 7 started out poorly. It wasn't until the 8th inning before we wiped the smiles off of the Chicago fan's faces. Lots of television shots of them biting their nails.

Of course I wanted us to win, but lord help me, I had eerie bouts of calmness, assuming we would lose. We have up a two game lead only to lose it. We only had to win one more game our of three. That was it.

Three World Series for Cleveland since I've been alive - hell, in the last 21 years. All three going to Game 7.  Each one going down literally to the bottom of the final inning. Blow me (and no, that is not an invitation)!!  Statistically, this had not ended well for us.

I suppose I should be happy for Chicago, but I'm not. Not really.

Actually, if you read the major news pieces on the Series, with some of the articles you'd have to really dig to find who the Cubs were even playing. Not that media makes or breaks the ballgame, but it seems to me that Chicago was the favored team in terms of sympathy / hope.

Even Fox's coverage - 90% of the shots of the teams in their dug-outs?  the Cubs. They miked one player - a Cubs player. Did they do one per team - no, they did not. The shots of the fans in the stands - mostly Cubs ones.

I am bummed to say the least.

With Cleveland (I'm sure along with most every other major sports team city),  it's always "wait until next year", or "there's always next year".

Honest to g-d - I'm tired of fucking waiting for 'next year'.

I love your blog, but Go Cubs Go.

I am so sorry for your loss.

Alas my Padres ain't never won no World Series. (grammar intentional) But Alas my Padres is an expansion team from 1969. One day my Padres will win their first just as your Indians will again. One day. Now where is my damn Prince?

I'm a Brit. I haven't got the foggiest idea what this post is about. But I feel I have to stroke your brow.
JP

When I heard the news I thought of you and how you must be sad and down.
I had mixed feelings as I used to live just across the street from the Cubs stadium in Wrigleyville so I was glad for them. It's always hard to feel joy when I no someone is sad for the same reason I feel good.