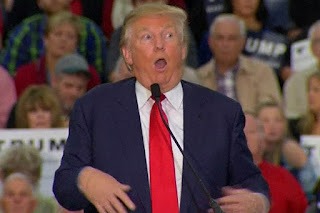 I've opted to call our new "leader" Dump.  It's a mash-up for sure, but it accurately reflects his persona.  One big stinking pile of dung. Waste, if you will.

For those who don't go back and read comments at my blog - my little anonymous "friend" left one high on his horse (I'm assuming it is a guy - though with no balls) mocking me and saying "thank g-d people made the right choice.  But if election tallies are even remotely correct - the people did make the right choice, as Clinton has more than one million more votes than Dump. So.........no dude.  No.

....oh, and that whole: he's gonna stop reading my blog?  Lies. He should get a job at the Dump White House. Or cleaning the bathrooms at Dump hotel.

Anon guy was right about one thing - I haven't called Dump the 'P' word. Nor do I plan to.

You can downplay Steve Bannon up anyway you please, but he's still a racist and there is soon to be another white supremacist in the White House. Then there is Reinhold Priebus (the SS is silent!) as Chief of Staff. That should go well, since he and Dump

After all his complaining that HRC cozied up to the big banks (which, to be honest, was my biggest concern about her) - and he's considering naming a Goldman Sachs putz to head the Treasury.

Worst of all - a man more vile than Dump himself: Fucking Rudy Giuliani as Secretary of State?  Yeah - what are the chances he doesn't utter the words '9/11' at every sit down he has in a foreign land?

And a name brought up for the Supreme Court - and he thinks sex with gays should be illegal even when they do it in their own bedroom.  .....so, there's that.

Of course, there are inherent issues with Dump in his new role. His DC hotel is leased to him by the government - of which he now leads. He has major tax issues - and secrecy - to which, in theory, he can name someone of his choosing to run the IRS. Let's not forget his billions of dollars of loans (read: debt) that he has with China and Germany.

...and he was all up in arms about Hillary's 'pay to play'. That concern may or may not have been legitimate, but with those aforementioned items just listed, his future could be downright blatant fraud.

But there are scarier things:

Mike Pence.  That fucking freakbag could be the one in charge. I mean - Dump will be 70 before taking office. Sure Dump mentions 'locker room talk', but looking at his body, it's fairly safe to assume he's never seen the inside of a gym.  So he might not make it to the end of his first term.

And I wonder if he gave any thought to a second term. There has not been a sitting president in the 20th or 21st century who have not opted to run. If he does, he'd be 78 by the end of his term...assuming he ain't dead.

Speaking of dead - those poor fucking sap on his Secret Service detail.  You just know every morning briefing comes with one of them saying:  "I've gotta take a bullet for that guy?  Fuck My Life."

So Mr. Anonymous can pretend he's no longer reading my blog - and I can play along with it. But there are posts (like this one), which you know he'll drop the pretense to leave a comment. I don't know what he (or his ilk) will think (or admit to) when Dump doesn't fulfill most of his promises. The wall fence might go up - but not at Mexico's cost.....then now we have a spending issue. Damn that 'more government'!!

For me?  I'm still counting on that bullet and that Secret Service agent who decides to duck.

or those workers in the white house having to put up with this schmuck.

dump wants the newt for state and the rude for attorney general.

and WHY do dump's evil spawn have to get top secret clearances? NO presidential children have EVER had this.

It is going to be an interesting train wreck to watch. An interesting time to be in DC. Gulli appears to have stepped aside from AG, something about too many business conflicts to clear the appointment process, and Dr Stabbie said he was not well prepared for managing a government agency and withdrew from consideration (he is brighter than I thought.) The outsiders have no idea what they have gotten them selves into, and the old guard advisers have lot and lots of baggage.

First of all, that anonymous person is probably a very rude houseguest! You don't go into someone else's home and act like a prick (another p word, no offense to the male anatomy)! I use anonymous because I don't have any of that other stuff and I have no idea what a URL is. I sign my official nickname whenever I comment so as not to be confused with all the other anonomi out there :)
Secondly, Dump is such an appropriate name on so many levels, and once again thank you for not calling him Donna anymore.

A patient of mine who is a history professor reminded me Rome survived Nero.