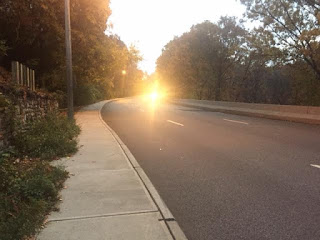 You know this hill.

It's the one where cars go off the road, over the sidewalk and up into our yard.

Walking up or down the hill is not for pussies. Clearly there is real danger.

But walking it twice per day, I have.

So, first of the week 710's fairly brand new car conked out in the driveway as he tried to leave early for work.

He came back in and thought I could help him push it so it could get to the street. You see, where he was in the drive was a place that I could not get my car around. He thought at least if it was parked on the street, I could go and the tow truck could fetch it easier.

It is impossible to put the new BMWs in to neutral.

This is great as a theft deterrent. But it kind of blows when you have a stalled car that needs to be moved.

As the crow flies, it's a short distance, but as a city planner isn't a crow, the walk is about two miles.

The "problem" isn't walking up the hill on my way home. It's more never racking walking down, with your back to the traffic as it ignores the 35mph by at least 15. There's no place to go if a car jumps the curb.

On the other hand, I'd never see it coming so I wouldn't be darting out of the way.

As it turned out, as soon as the tow truck came, 710 did go to work........in my car. While BMW "forgot" to contact him about a loaner, in the big scheme of things, it was no big deal. For this entire week, I just walked to and from work.  Well, one day 710 did pick me up. He was getting home later than normal - and I got stuck at work. So he was five minutes from my place and he swung by (in my car) to get me.

I know I can work long hours and I know I pay for parking, but honestly, if the weather cooperates, I am fine walking to work more often. It hasn't hurt that it's mid November and while 40 on my morning walk (in the dark), it's upper 50s on my walk home.  I do like this climate change.

Ignore the traffic, and enjoy the walk.

I'd almost prefer the walk and the meditation aspect of it.

You could have rollerbladed... ;-)

That was our unfortunate experience with not one but two BMWs. We finally had to think of them as we would a houseboy, "At least he's pretty".
Glad your enjoying the walk. Walking to work is a luxury.