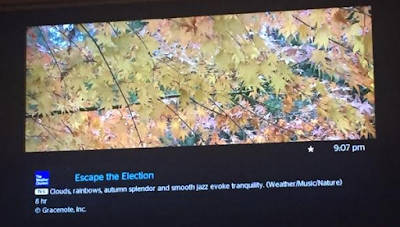 I think I used up all my angst on the World Series.

Don't get me wrong, I still have plenty of stress, but I'm still rebounding from lack of sleep for those seven nights.

And yes, I know it's been a week since the Series, but the timing went right into the end of this election.

It's too much too soon.

We flipped around tv last night, interested in hearing results, but feeling frustration at making pseudo-calls based on 9% of the votes tallied. The "news" folks were covering all bases, all angles....and none of it (or little) based in actuality.

And if I had to hear one more person call it "an historic election" I was going to barf. They all said it, though possibly none more than Anderson Cooper. He'd say it would be "historic" if Clinton won. Then say the same thing about (t)Rump.

Well, of course it would be historic. Presidencies usually are. And by usually, I means ALWAYS. Even Harrison's 30 day administration is historic. It is, after all, history.

But like some of the World Series games, this is far too difficult to watch. It is 22:47 as I type this and Trump is ahead in the Electoral College.

FUCK.  This is scary.

As for the House, Republicans keep that. It amazes me with their single digits approval rating, that these morons get (re)elected. Voters have no one to blame but themselves. Why would / should the Representatives change their behaviour if they keep getting their job back - no matter how shitty they do their job?

I don't think I'm going to like what I wake up to in the morning, but I'm not going to stay up.  It's too tense and way too much on the line.

I know I "joked" about wanting to see (t)Rump win, so all these believers in him will see how he makes a shambles of everything, but now it's not funny. It's all too real. Or potentially real.

We (read: I) couldn't keep on a news station for any period of time. We jumped to any number of reruns of the Big Bang Theory or Gilmore Girls.

As you can see, even the Weather Channel was getting in on the 'event'.  ...and I'd much rather hear "you weather on the 8s" than to hear Wolf Blitzer go county by county on the Florida count.

I'm going to pee and go to bed.

Song by: Fleetwood Mac
Posted by Blobby at 12:08 AM

Great post!!!!! I couldn't agree more. These voters don't do their homework and just keep re-electing the same buffoons. I too am shuttering if Trumps wins, which it looks likely. In the famous words of Tallulah Bankhead ." Thank God for alcohol....it makes all of you more tolerable."

What have they done? They have no idea, what they have done. Trump has no clue what he has gotten himself into.

FUCK ALL THE IDIOTS!

Hillary never had a chance. What - you believed the media's polls? Bernie had a chance but Hillary and the media cheated him out of it. Which means one very sad fact - you were forced into supporting a cheater. What kind of person supports a known cheater for POTUS? The sad fact is Bernie stood a much better chance. I think people need to look in the mirror and figure out what their ethics really are instead of being told what they are. There is no such thing as the lessor of two evils. There is only evil and fair. Which do you support?

The two party system's control over government is the real failure here. You were set up to lose from the beginning.

We watched from 6pm until 1am... 7 hours of election coverage, eventhough I said I wouldn't. It was just too close to call for me to turn the channel or go to bed at a reasonable time. Talk about a nail-biter!!!

I'm in shock, and can hardly imagine the many steps backwards our liberties will be taken in the coming 4 years.