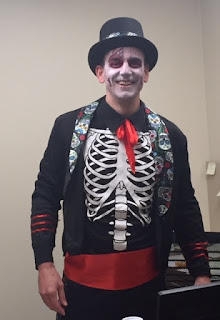 Is there anything less exciting than Halloween on a Monday?

It's almost a guaranteed dud. It's not just a work day, it's the start of the week. No time or effort truly goes into this if you're an adult.

I mean, I had a great time dressing up last year. I put time and effort (and $$$) into my costume. I fear it was a once in a life time event. I could not get jazzed up for it this year. Maybe next time when it's on a weekend.

That said, some people did dress up.

It kind of amazes me that people do it for work....or at work.

This man in the title image? He's one of the physicians who works for me. And yes, he had an outpatient clinic day - with lung nodule patients.

Once again, zero trick or treaters. None. Zilch.

I'm making 710 take the bag of Reeses Cups to work tomorrow. They ain't stayin' around here.

Scott and Markie - our neighborhood gay friends - had a party last night. Not a huge one like last year. A Monday night party. Costumes were optional.  We opted out, but were two of only four who did. 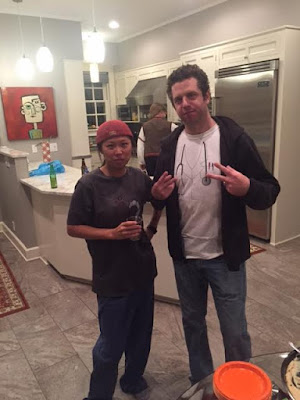 This is Suzanne and Dan.  I love these two. But I guess they were Dan & Dan.

Yes, Suzanne went to a Halloween party as her husband.  There were a lot of "'sup?" and "fuckin'A", though Suzanne could not get Dan's eastern Maryland gangsta signs down.

We only stayed an hour or so. I had to get home and write this and go to bed. The Indians games have gone late, so Blobby hasn't gotten tons of sleep. I couldn't stay at the party. I needed my sleep.

Of recent I've had a change of heart so to speak. As I commented before I had decided to keep my National league allegiance but alas I have no friends in Chicago and I correspond with no bloggers in Chicago. Therefore I've come around and am now going to root for them there Indians in hopes that you may have the 2016 World Series title in your town. Go Cleveland!
There I flip flopped on baseball but I ain't gonna flip flop politically.

Let's hope that your boys take home the prize!!!
Yes, I'm slowly but surely making my blogging 'comeback'.
I've realized lately how much I missed it. :)

We had zero trick or treaters too, but that's because our house is on a dark horse shoe shaped street.

All the parties and fun stuff happened on Sat night around here. I had a ball at a local watering hole.