(You're the) Devil in Disguise 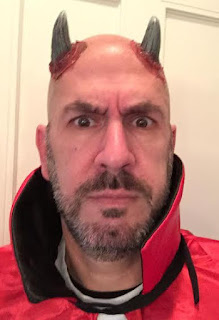 Well you can't say I didn't call that one. With Sunday's post I said I'd be in no mood or shape to post a Halloween entry for Sunday.

I don't know about my mood, but I can tell you I was in no shape. It's been a while since I've woken up and wondered if I even bothered  (or able) to take out my contacts. And taking a glass of water to bed doesn't help when you basically just pass out after you get upstairs.  Sure, it seems like a good idea, but it is fairly useless. The time change didn't help matters much.

Previously I had said that Markie and Scott (mostly Markie) are really into Halloween. The house is done up inside and out. There is even a special room where Markie keeps a bunch of creepy faceless dolls.

So yes, from the title image, you saw I went as Beelzebub himself.

The outfit turned out pretty well, if I say so myself.

The horns? Much better than I anticipated after seeing them in their packaging. Of course the folks at Halloween City (you know, one of those pop up stores) were of zero help. So from the package instructions, I gathered I needed fake blood (I didn't). Said I needed some blending powder (I didn't). Said I needed the spirit gum to adhere the horns (I did) and some adhesive removers (and I didn't).

And as it turns out, all sales are final, so there is $13 bucks down the drain for that other crap.

But I wasn't just going as the Devil. That was never the plan. Anyone can go as Satan. Well - anyone who has $50 for horns, the trimmings (that were not needed), a pitchfork and a cape. No, I had other ideas. Well.....idea. Singular. 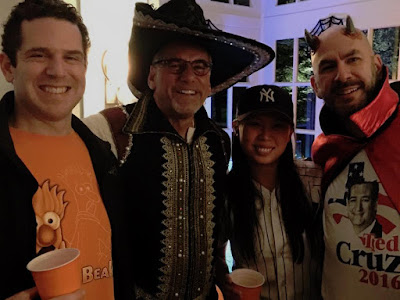 The t-shirt was supposed to be the pièce de résistance.

Ted Cruz was always my first choice, because of his mole-like fart face, but I had to wait. From the time of the costume idea to execution, it was anyone's guess if he'd still be in the race. No worries, Marco Rubio was my next choice. Trump and Carson were never on my radar for this, and let's face it, I'd be surprised if Pataki's camp has even bothered to spend money on apparel.

And no worries, I got the shirt through amazon. It was not technically Ted-approved, but it also cost me one-third of the official shirts and I didn't get stuck on some donor list of which I could never remove myself. And since it was Amazon Prime, two day free shipping.  Score!

Now, while our 'hood is a fairly liberal bastion, others would be at the party too. I know I could be courting "controversy" {sing that like Prince!}. So be it, I say!

Folks seemed to notice the shirt or the Devil outfit, but rarely the two together - at least at first glance. So I would make remarks like:  "He (meaning Ted) does my bidding!"  Or I'd switch it around and say that I did Ted's bidding. Or the ever popular, "sometimes people don't ask the big guy upstairs {point upwards with the pitchfork for affect} if they should run for President."  My fave would be, if someone asked 'why Ted Cruz?', I'd go "I'm (Satan, that is) a big BIG fan!"

These would usually garner some howls. Save once.

Yes, some man - un-costumed, I might add - told me he really liked what Cruz had said during the last debate. Groan. I will give him this, he's not sold on Cruz and even said it is the first time in his life he cannot imagine voting for anyone.

I think I excused myself to get an eclair. 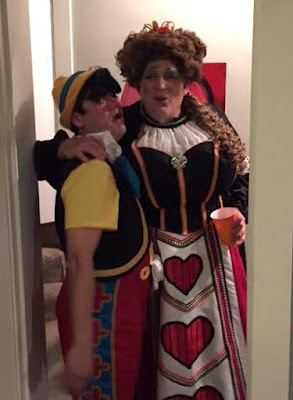 One of the hosts of the party is a professional costume designer - and we are talking big playhouses et al. So he and his partner's costumes (above) were elaborate and very detailed. Many of the guests work with Markie (as Pinocchio) in the theater, so theirs were too. A steampunk Annie Oakley. An abandoned bride. Mary Poppins. And Alice and Alfalfa. 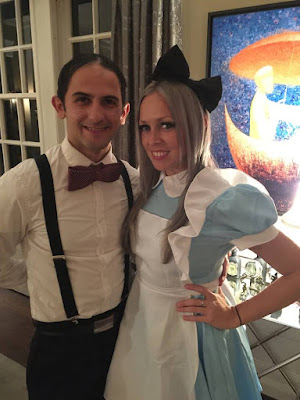 Actually, a number of their friends and our neighbors were dressed by Markie. He didn't offer it to me, but I would have refused. It was his party, he shouldn't have to work at dressing people too lazy to have their own ideas. Yeah - I said it. 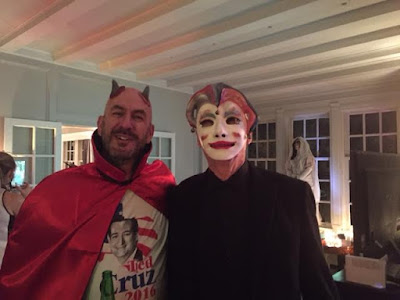 Our friend and neighbor Piet, came in a Venetian mask that creeped the hell out of me.  Me! The Devil!   You look at him for more than 15 seconds and you just get weirded out.

He was smart enough to come with a second mask that would allow him to eat and drink.

In the end, I ended up talking to a bunch of people I knew and many more I did not. It is amazing what a little alcohol (and isn't "little" all relative.....I mean, really???) and hiding behind a mask can do for any social awkwardness.

As it was, I walked home alone, drunk and in the dark - red satin nylon cape wafting in the breeze behind me.

Petey was happy to see me - well, to be let out to pee. I peeled the horns off my head (and apparently took out my contacts). Markie told me any natural skin oils will help remove the adhesive and they did. That and sweat.

And a few minutes later, the Devil passed out......water sitting at bedside......untouched.

Song by: Elvis Presley
Posted by Blobby at 12:02 AM

you look great!
cruz is from some level of hell we haven't discovered yet.
and the other costumes were clever also.

Great looking costume! Glad you went to the party even though Halloween isn't your thing.

You make Hellboy look like a pussy cat.
JP

Well, I'll give you props for dressing up more than I did. ;-)